This is an in-person networking and knowledge sharing opportunity.

Since the 2008 financial crisis, neoclassical synthesis has increasingly been acknowledged as an unsatisfactory theory on which to base economic policy. Its failure to incorporate finance in its models is often identified as its most obvious weakness. Author Andrew Smithers, FSIP, will break down the detail of his thesis, which originates from his 2022 book, The Economics of the Stock Market, to provide a coherent explanation how the economy and financial markets really work and how the two interact.

In his lecture, Andrew will explain how current economic policy is bound to lead us into yet another crisis. Its cause is defective theory; whose reform requires revolutionary change not just tinkering. The reason? It is unscientific as it is based on assumptions which are either untestable or, demonstrably wrong, when tested and it fails to include finance.

Andrew will be joined by Jane Fuller, FSIP, who will give her verdict on his assertions and you’ll be given the opportunity to have your say on the debate. Continue the conversation and join us for in-person networking after the event.

This event forms part of our Challenging economic consensus lecture series. Other events in this series include Radical Uncertainty: Decision-making for an unknowable future with John Kay, FSIP, and Market Mind Hypothesis: The final frontier of behavioural finance with Patrick Schotanus.

Andrew Smithers, FSIP,  founded Smithers & Co in 1989. Before that he ran S G Warburg's successful asset management business for many years (now part of BlackRock). A regular financial commentator and columnist, and author of many academic publications, he co-authored Valuing Wall Street with Stephen Wright (March 2000). He wrote Wall Street Revalued: Imperfect Markets and Inept Central Bankers (July 2009), and Can We Identify Bubbles and Stabilize the System? in The Future of Finance, published by the LSE in September, 2010.

Other books include The Road to Recovery: How and Why Economic Policy Must Change (September 2013), and Productivity and the Bonus Culture (July 2019).

His latest book, The Economics of the Stock Market has been published by Oxford University Press in March 2022.

Andrew seeks urgent change to accepted economic theory and the regular financial crises on which policy based on it causes.

Jane Fuller is a fellow of CFA Society of the UK and a visiting professor at City, University of London. Jane spent 19 years at the Financial Times, where her roles included Financial Editor and Lex writer, and she continues to train FT journalists. She is a regular columnist for the ACCA’s digital magazine, Accounting and Business, a former member of an advisory committee on auditing at the Financial Reporting Council and an honorary fellow of the Chartered Institute for Securities & Investment.

Richard Dunbar, CFA, FSIP, is Head of Multi-Asset Research at abrdn. Prior to this, Richard was Head of Economic and Thematic Research at the company, which he joined in 2014 as part of the acquisition of Scottish Widows Investment Partnership (SWIP).

At SWIP Richard had previously held roles in the UK and Global Equity teams since joining the firm in 2000. Before joining SWIP, Richard worked for seven years with Blairlogie Capital Management as a portfolio manager for the UK and Europe. He started his career in 1989 as a UK portfolio manager with Murray Johnstone.

Hilary Eastman, CFA, is PwC’s Head of Global Investor Engagement. She specialises in helping companies understand the needs of the investment community on trends in financial and narrative reporting and audit, corporate governance, regulation and sustainability. She has a specific focus on environmental, social and governance (ESG) reporting and assurance and investor relations.

Hilary has a background in asset and business valuation and previously worked at the International Accounting Standards Board (IASB), where she initiated and led their investor engagement programme and led the fair value measurement project, which resulted in IFRS 13 Fair Value Measurement.

Please note if you require special assistance or have specific access requirements, please contact the events team at events@cfauk.org 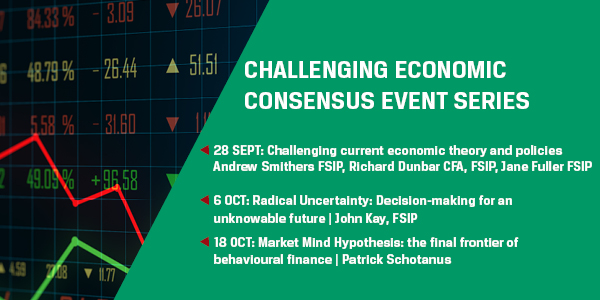