2017 Winner of Investment Essay Competition in Honour of Benjamin Graham

The CFA Society of the UK and Brandes Investment Partners are delighted to announce the 2017 winner of the investment essay competition honouring Benjamin Graham, the founding father of both value investing and the CFA Program.

John Citron, CFA, was awarded the £5,000 prize at the CFA UK Aberdeen Road event held on 21 June in London. His essay discusses how an update to Graham and David Dodd’s 1934 book Security Analysis would look given the differences between Graham’s time and today’s investment environment. 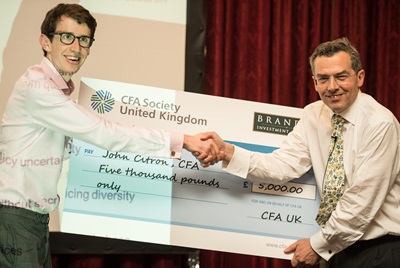 “Even more than 40 years after his death, it’s still pretty hard to find fault with Ben Graham’s works, but that was the challenge that we set for this year’s Brandes prize entrants,” said Will Goodhart, chief executive of CFA UK. “Our winner, John Citron, suggests that given the changes that we’ve seen, Graham might now have accepted that there are some genuine growth stocks. John’s essay is a great read and a good opportunity to revisit Ben Graham’s works. It’s a more than worthy winner of this important prize.”

“As was last year, we were pleased with the many essay submissions we received this year and importantly, with the quality of the writings,” commented Charles Brandes, CFA, founder and chairman of Brandes Investment Partners. “It is encouraging to see such a keen understanding of Graham’s value philosophy among young investment professionals.”

The runner up was Ben Hall, CFA, read his essay here

About the Investment Essay Competition

The annual competition awards a £5,000 prize, provided by Brandes Investment Partners, to one winner for a paper that draws on Graham’s thinking and work as well as promotes financial analysis as a profession. It is open to all members of CFA UK under age 35.

Part of the worldwide network of member societies of CFA Institute, CFA UK represents the interests of 11,600 investment professionals in the United Kingdom.

Brandes is a leading investment advisory firm, managing global equity and fixed-income assets for clients worldwide. Since the firm’s inception in 1974, Brandes has consistently applied the value investing approach, pioneered by Benjamin Graham, to security selection and was among the first investment firms to invest globally using a value approach. Headquartered in San Diego, Brandes and its related entities have offices in Milwaukee, Toronto, Dublin and Singapore. To learn more about Brandes, visit thewebsiteor follow it onLinkedIn.