CFA UK Board member Marshall Bailey has been appointed as Chair of the Financial Services Compensation Scheme Ltd (FSCS) with effect from 1 April 2018. The appointment was made by the FCA Board and the Prudential Regulation Committee (PRC) with the approval of HM Treasury. Marshall Bailey succeeds Lawrence Churchill who is stepping down after two successful terms as chair. 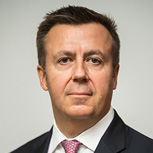 Marshall Bailey has worked in financial services for over two decades, and has held senior positions in a number of firms. He has worked on issues around financial reform and conduct, most recently on the Board of UKFI. In addition, Marshall is currently a non-executive Director at Chubb European Group and CIBC World Markets in the UK.

The FCA’s Executive Director of Strategy and Competition Christopher Woolard, who chaired the selection panel, commented:

'We have conducted a thorough recruitment process to identify the most suitable person to become the next Chair of the FSCS. Marshall Bailey was selected from a strong field of potential candidates by a panel comprising members of the PRC, FCA and FSCS Boards. Marshall brings a wealth of experience from the financial services industry and we look forward to working with him in his new role at the FSCS.'

'I am delighted to be joining the FSCS as its new Chair. The FSCS is a critical component of the UK’s regulatory infrastructure, and vital to the trust we place in our financial system. The FSCS works closely with banks, insurers and building societies throughout Great Britain, as well as with providers of investment and pension advice. As with protection schemes throughout the world, the FSCS’s role as a “lifeboat fund” protects our financial services customers when things go wrong.

'The work previously done by Lawrence and the FSCS Board has been excellent, and I thank them for the work they have done to provide a resilient platform through a difficult period. Mark Neale and the executive team are deeply dedicated to ensuring that this continues, and that consumers, especially vulnerable ones, are protected.'

'I have been proud to serve as Chair of FSCS over the last six years, during which time we have paid over £1.8bn in compensation to customers who have lost out and recovered £13.2bn from the estates of failed firms including those who failed during the financial crisis and subsequently. This includes the Icelandic banks and Bradford & Bingley.'