Only 42% of EU nationals polled said that they plan to continue working in the country post-Brexit, whilst 16% plan to leave and the remainder are undecided. These results are a clear sign of the uncertainty and disillusionment in the profession surrounding the expected repercussions of the Referendum result for the UK market.  An overwhelming 91% of EU respondents indicated that they consider the competitiveness of the UK as a financial centre to have deteriorated, compared to 71% of British respondents. Rating the extent to which Brexit has had a direct negative impact on their perception of working in the UK, EU nationals also awarded an average score of 7/10. 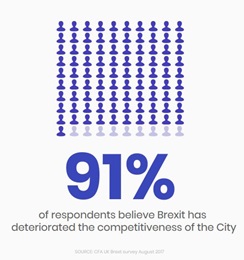 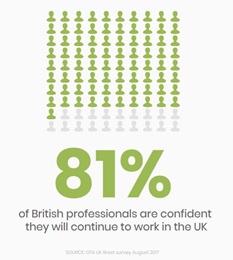 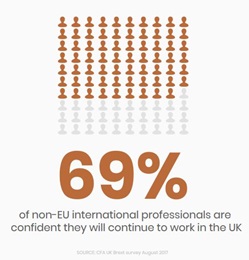 Brexit is further dissuading EU nationals from encouraging others to accept positions in Britain: only 15% said that they would encourage non-UK citizens to come and work in the UK now.

By contrast, a high proportion of investment professionals from non-EU countries still envisage a future working in the UK. Eighty-one percent of British investment management professionals indicated in the survey that they plan to continue working in the country following Britain’s departure from the EU, and 69% of those holding non-EU international passports indicated the same. The vast majority of the latter (80%) are nationals of Asian and North American countries.

Despite uncertainties about the future of the profession in light of Brexit, 48% of British investment management professionals polled also stated that they would encourage non-UK citizens to work in the UK; whilst still less than half of the British respondents, this is over triple the percentage for EU nationals.

Respondents’ views are likely to have been impacted by their sense of job security in the current climate. According to the survey, 60% of British nationals feel that their job is secure, followed by 52% of non-EU international employees and only 43% of EU nationals.

Says Will Goodhart, chief executive of CFA Society UK: “While many of the outcomes of Brexit remain unclear, we can certainly expect a change in the profile of the investment management workforce in the UK. Many EU professionals working here intend to move to other markets once Britain has left the European Union, and we may see this increasing over the coming months.”

He continued: “The resulting fall in the representation of EU nationals will be a huge loss for the UK market and it is crucial to minimise this as much as possible. Currently, an even greater number of EU professionals are unsure of the future. It will be vital to resolve the issues impacting the City post-Brexit quickly and favourably in order to retain those undecided. If the City doesn't attract and retain the best talent from all regions, its ability to serve clients and the end investor will be weakened.”

For further information about the results or to request an interview, please contact Ogilvy Public Relations: CFASocietyUK@ogilvy.com

CFA Institute published their Guide to Brexit in 2017.

Part of the worldwide network of member societies of CFA Institute, CFA Society UK represents the interests of 11,600 investment professionals in the UK.