The tide is turning on gender diversity 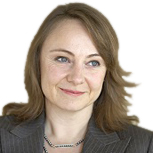 
So perhaps we should sit up and take note when she says the tide is turning on gender diversity within the investment profession and the global economy more generally.

‘Mckinsey recently did a study which showed that if you brought women to an equal footing as men in the workforce, by 2025 you could add $12 trillion worth of global GDP.

‘At this point in time, given the demographics of ageing populations and low growth around the world, we have a genuine economic reason to do that,’ she said. However firms’ cultural habits remain an issue. ‘In my view, because of these factors, that’s about to change dramatically in the next ten years,’ she added.

Increasing ethnic diversity is as important as gender diversity she believes. In an age of globalisation, companies with people from different countries and backgrounds have a cutting-edge she says.

She describes herself as a ‘global citizen’, having lived in Paris, Beijing, Edinburgh, New York, San Francisco and Boston – where she completed the CFA charter. She is currently based in London.

Educated in France and China, she holds an MBA from the Ecole Superieure Libre des Sciences Commerciales Appliquees (ESLSCA), a master's degree in Mandarin Chinese from Dauphine University in Paris and an undergraduate degree from People's University (Renda) in Beijing.

She is also the mother of two daughters, aged 12 and 15, whom she adopted from China.

‘I’ve had a passion for China since I was five, when I first read about it. And when I left for China in the mid 80s, people were saying ‘are you crazy?’

‘After China I went to Scotland to start a career in asset management. Then I went on to the US where I joined Batterymarch. There we set up one of the first China funds ever launched.’

‘Out of ten ideas maybe one will be successful but you just have to try. For me, that’s what worked.’

Join the next Women's Network event on 25 November 2015 at the Grosvenor House Hotel where a panel of senior leaders in investment, diversity and corporate governance will discuss gender diversity in investment, its importance to performance, and how we can continue to increase female representation at a senior level. Find out more and book your place here