Tim Hodgson, ASIP, is worried about climate change. It is an issue he wants to devote more time to at the Thinking Ahead Institute, the global not-for profit investment research organisation that was created four years ago. “I want the Institute to grapple with climate change, because in the early research, I’m getting quite frightened,” he says.

In September, the Institute, which stems from Willis Towers Watson Investments’ Thinking Ahead Group (which itself was set up in 2002), revealed its top fifteen extreme risks for investors. Global temperature change climbed to the top spot, with the next most extreme risk being the potential collapse of global trade, driven by the rise of protectionism, and primarily due to developments in global politics over the last six years. The third most extreme risk was cyber warfare, and the risk of the internet becoming weaponised.

So how seriously should investors be taking these risks? And how can they mitigate against risks in their most extreme forms?

“There is no mitigation for mass extinction,” replies Hodgson. “So what do you do about it? Actually the value of extreme risk thinking is to challenge your normal practices, and normal risk models and normal behaviours, because actually once you get deep into an unattractive tail, then at some point its game over. I personally, in an extreme risk thinking context, find cash incredibly attractive.  Cash has optionality. Its value changes very non-linearly,” he explains.

Hodgson is well known for being a deep thinker, someone who looks at the big picture and how it will impact the investment industry. He received an MA in Economics from Cambridge in 1989, and then, after 18 months at Midland Bank, joined Stamford Associates. In 1995, he moved to Sedgwick Noble Lowndes as a senior investment consultant, and in 1998, joined Watson Wyatt, now Willis Towers Watson. He initially started consulting for UK and overseas institutional clients, and then found himself concentrating on high performance specialist managers and hedge funds, and running portfolios of managers for clients. He then became involved in investment research, with a particular focus on new ideas, and became a founding member and head of the firm’s Thinking Ahead Group.

So what trends does this futurologist believe will impact the investment industry? An important theme going forwards is going to be the rise of purpose, Hodgson believes. “It probably needs to morph into a bigger concept, like reshaped capitalism,” he suggests.

What does he mean by that? Hodgson believes that climate change is a result of the structure of our current economic system. “I think we are now reaping the harvest of the capitalist seed. We have created an economic system, and the system has been permitted to produce externalities. It externalised as much cost as it could. The investment industry has collected the financial returns, while we have run down our stocks of natural capital. Externalities are pretty much nothing other than the costless dumping of waste into an environmental sink,” he says.

He also thinks that the industry is beginning to re-think its purpose, citing the work of the academic Colin Mayer. Mayer’s recent book, Prosperity: Better Business Makes the Greater Good, makes the case for rethinking corporations so they serve society, rather than just shareholders. Hodgson also points to the letter written by Larry Fink, chief executive of BlackRock, to investors in January, as a sign of the changing times. In the letter, Fink states that purpose is not the sole pursuit of profits, but the animate force for achieving those profits. He called for greater leadership, and said companies must ‘demonstrate their commitment to the countries, regions, and communities where they operate, particularly on issues central to the world’s future prosperity. Companies cannot solve every issue of public importance, but there are many – from retirement to infrastructure to preparing workers for the jobs of the future – that cannot be solved without corporate leadership.”

Part of the answer is, of course, linked to how strong and resilient an investment firm’s culture will be in the future. The Thinking Ahead Group has identified key attributes for the asset managers of tomorrow. They must have strong cultures, they must make commitments to technology, they must have technologically savvy leaders, and well-positioned business models. They must also have recognition of comparative advantage – knowing what they are good at. Finally, they must be good at dealing with change.

Hodgson believes the individuals working in the investment industry are high quality professionals. “But I believe that over the course of my career, the organisations have generally morphed from being professional to being businesses.” It means the industry still has a lot of growing up to do, if it wants to truly professionalise.

In fact, if there was one thing Hodgson could change about the asset management industry, it would be to get rid of variable pay in all its forms, and try to re-set pay at a lower level to change behaviours within the industry. “It shouldn’t be about earning bonuses. It should be about doing a good job for the end saver who needs a retirement income. We’re probably paid a bit too much,” he argues. 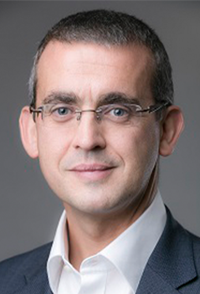