ByteTree Asset Management is launching its Bitcoin fund for institutional investors later this year. It’s founder, Charlie Morris, says this is only the beginning for digital assets.

In 2011, Charlie Morris, an investment industry veteran, decided Bitcoin was a fad. But, two years later, he looked at it again. “I thought it was rubbish, and it wasn’t going to work. I dismissed it. But in 2013, I went back to it, and I started to see the error of my ways. I realised, it was actually a game changer,” he says.

Morris, who spent 17 years at HSBC Global Asset Management as the head of absolute return, managing a multi-asset fund overseeing $3 billion in assets, became interested in how digital assets worked. His interest led to the creation of ByteTree.com, the data analysis and insights platform which delivers a range of statistics including coin counts, total output volume, hash rates and transaction numbers of cryptocurrencies. ByteTree.com collects, collates and indexes over 80 metrics for each blockchain network.

And now, Morris, alongside chief executive Charlie Erith, has launched ByteTree Asset Management, an investment proposition that aims to offer professional investors access to the digital asset class in a regulated manner, using the real-time intelligence the business has gathered.

But are digital assets an institutional asset class? Morris, who is chief investment officer, certainly thinks so. “It’s an asset class, and I say this carefully. I worked at HSBC for seventeen years. I was a multi-asset investor. It’s not an equity, and it’s not a bond. It’s not a currency – the phrase cryptocurrency is ridiculous because this is not money. It’s an asset, a digital asset. It’s more like a commodity. You can’t drive your car with it, or eat it, but it has many of the same economic qualities as a commodity,” he argues.

The firm aims to launch its first fund in January, and says it there is considerable interest from family offices. It will invest in Bitcoin alone.  Morris sees Bitcoin as a credible diversifier in an institutional portfolio, and dismisses concerns that the infrastructure around digital assets is not strong enough to support institutional investment. He argues it is enterprise grade, pointing to Fidelity’s Digital Assets business as an example of mainstream providers offering solutions. “The infrastructure is really good now, and it gets better and better all the time.”


What does the future hold for Bitcoin?

He also believes there is a generational shift taking place. “I think it will happen naturally. Younger people will naturally be more comfortable with digital assets than older people. Every year we have more of that demographic shift. But let’s go back to the central banks, they are also all very keen to launch digital currencies. There will be online exchanges that work seamlessly, and people will become more comfortable with digital money. They will naturally start to adopt digital assets,” he says.

Morris also believes institutional investors will be attracted by the notion that they can use digital assets as a hedge against inflation. “The first people who came into Bitcoin were tech savvy. But in the last couple of years, it’s been more about the macro investor who fears monetary debasement. So the macro investor sees this as a hedge against the inflation of money printing.”

Bitcoin has seen its best gains during risk-on periods, when inflation has been stable and rising, he has stated. Morris points out that it has started to decouple from technology stocks, and move closer to the US long bond yield. This, he argues, reinforces the notion that Bitcoin is a risk-on, and value asset, also known as a real asset.

“If you talk to people privately, they totally get it, but when it comes to group think and benchmarking and career risk and all of those things, people are still worried. But we are trying to present something to the armchair investor in digital assets. They want to own this asset, so we have to look at how we de-risk it for them. By having a high quality legal structure, custodian, trading arrangements, and by trying to have protection against bear markets, I think institutional interest in the asset will look very different ten years from now. This is a bold experiment, but the best ideas always win.” 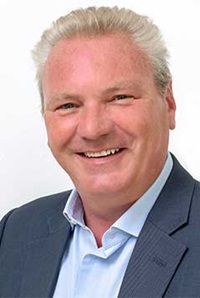