Boutique corner: What does it take to build an asset management business from the ground up ?

In 2018, David Ric, CFA, came together with two former colleagues to create Resco Asset Management, a fixed income absolute return boutique. He talks to Professional Investor about building a business with sustainable values, and why it’s exciting to learn as he goes along

In the mid-2000s, David Ric, CFA, worked at the London offices of Fischer Francis Trees & Watts (FFTW), the US fixed income manager. There, he met Alex Eventon and Scott Schuberg. The trio became trusted confidants, but could never have imagined that, just over a decade later, they would become co-founders of a new investment business as well. Their time at FFTW played a key part in how they went on to define their own values.

“Not many people know Fischer now, but it used to be one of the biggest bond houses in the world in the ‘90’s. The firm was focused on global central bank mandates and institutional portfolios but never went down the path of retail growth,” Ric explains. “We were a tight group of like-minded people, and we had a great time working together.”

Growing up, Ric had always been interested in financial markets. He completed an MBA from the University of Zurich, and started to invest the money he made from his part-time jobs. “I was investing myself, my hard earned money, either in stocks or in options. Sometimes I lost money along the way, but that’s an important process for every investor to learn. It teaches you to develop rules that you’ll keep for the rest of your life, and it is how you grow as a manager,” he says.

After graduating, he joined FFTW as a market specialist in 2003. Five years later, FFTW was subsumed into BNP Paribas Asset Management. In 2007, Ric moved onto UBS Asset Management to broaden his institutional experience. By then, Eventon and Schuberg had gone their separate ways as well.

In 2012, Ric joined BlackRock as a portfolio manager and three years after that he moved to Amundi to become head of absolute return, fixed income. Having spent time at some of the world’s largest asset managers, he reconnected with Eventon and Schuberg to see what life in a boutique might look like.

“I think the stars aligned in 2018. I wanted to do something more entrepreneurial, where I could put my stamp on everything from culture to the values we stood for, as well as how we managed money and built the next generation of employees. Alex and Scott were already working together and forming the framework of a new manager, and we started to look at how we could build a platform together,” Ric says.

Resco Asset Management (an amalgamation of the trio’s surnames), is an absolute return, unconstrained fixed income manager that caters to family offices, institutions, high net worth individuals, and fund of fund managers. Its first product is the Resco Macro Credit Fund, formed using the two ‘backbones’ of fixed income: the global liquid interest rates and FX derivatives used in its macro strategy, which allows the firm to express global thematic views, it says, irrespective of economic and market cycles; and its credit component, which allows for both top-down and bottom-up analysis, to decide whether or not there is value present at a market or single name level.

“We go from this liquidity-induced world into more frequent bursts of risk on and risk off. It’s about looking at different volatility quadrants, and it tends to work that both strategies lean on each other,” Ric explains.

What is unique is the blend of values Resco espouses. The firm says it wants to create a more prosperous world. This doesn’t just involve wealth generation for its clients, but also indirect prosperity through the wealth it creates as a manager and the employees and small businesses that support its journey. That means focusing on the physical and mental health of its employees, supporting the community that surrounds it as well as capping annual average earning margins over time – it wants to change the perception of what it believes to be an honourable and exciting profession.

“If you do well, you should be rewarded. But if we don’t reach the net returns that we aim for over time, it is true that fee structures ought to be challenged by investors. Some people don’t think that, as a hedge fund, we should think about these things. But we are well aware of the image that the investment industry has. We just want to be authentic and honest with the ultimate client. If we put all our energy into that, then we’ll be constantly energised and fed by the satisfaction of our customers,” argues Ric.

But, as a start-up with $10 million assets under management from a cornerstone investor, the question becomes how to maintain those values as the business grows. For Ric, it is about continuing to prioritise core values no matter how much growth it sees. It is also about learning as they go along. “It’s exciting to open a business, because you don’t know, exactly until you do it, what it will entail. Everything was a challenge in terms of setting up the new business, though the surprising part was how quickly we were able to get the green light from the FCA. The tough part was everything that is normally taken care of by others in a large institution, such as legal, compliance and the operational side. It was all part of the learning curve.”

If the firm could grow and accomplish anything similar to what FFTW achieved, then, says Ric, he would be more than happy. “Part of our aspiration is to continue what we thought was an amazing legacy back then. We want to create a leading global fixed income investment boutique.”

Ric completed the CFA Program when he was at FFTW. “I joined in January 2003, and I immediately enrolled for the June exam. I studied finance and economics, but it was always good to have a refresher and an alternative way of looking at things. My advice for anyone asking about whether or not they should do it is that it is the required education level for anyone who wants to work in investments.”

When he’s not working, Ric enjoys spending time with his family, and says he likes to keep physically and mentally fit. “I have become a big proponent of meditating, and of using physical exercise to build resilience. That is something that is increasingly getting fragile in a world that is constantly becoming more digital.” 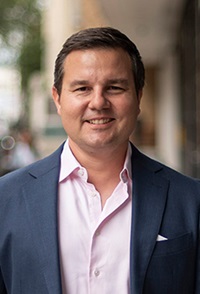 Are cashflow driven investments the solution for pension funds?

Every company in the future is going to be a technology company, says, Cruttenden, ASIP