The 1980s movie Wall Street, portrayed greed as something that was good by the character Gordon Gekko, played by Michael Douglas. Although the movie is fictional, there had been a rise in the 1970s of individualistic behaviours in corporations, where greed and selfish behaviours were encouraged.

But are these behaviours still relevant today? According to John Kay, British Economist they are not a good way to do business. His new book, Greed is Dead: Politics After Individualism, co-written with Sir Paul Collier, Professor of Economics and Public Policy at the Blavatnik School of Government show new ways of thinking are emerging and the intellectual concept of individualism is disappearing.

“The idea goes back to the 1980s and Gordon Gekko and the like, that you could be greedy and still feel good about yourself,” says Kay.

“We don't think you can be greedy and still feel good about ourselves. We don't really think that very many people do and the ones who do shouldn't be in charge of our finances or our businesses.”

Are we becoming more social cohesive during the pandemic?

The book was only finished as countries started going into the Covid-19 lockdowns and calls for societies to have a shared common purpose and that individualism causes chaos. Kay thinks the way different countries have responded to the pandemic show whether or not they have a community mindset.

“The ones that have dealt with it most effectively have been societies with very strong degrees of social cohesion of different kinds,” says Kay. “Some of the Nordic countries and Germany are the successful ones amongst the West.

“In the Far East, Singapore and South Korea have dealt with it relatively well. The disaster cases seem to be India, Brazil and the United States. There's a lesson for all of us in these contrasts.”

But Covid-19 is not the only issues society faces at the moment, climate change is also threatening the way we live.

Kay hopes these matters will help turn the tide against individualism.

“Climate change is an issue, but in truth, most companies are neither part of the problem, nor part of the solution,” he says. “If we're finding solutions to climate change, it is actually going to be in terms of developing new technologies that will enable Asia and hopefully Africa to enjoy economic growth without great increases in carbon emissions.

“That's what we should be focusing on and a lot less on making speeches and conference saying how concerned we are about climate change, which we have an awful lot of at the moment.”

Although Kay feels ESG is taking things in the right direction, he believes it is important to really look at the substance of what companies are doing about these issues, rather than what happens at a surface level.

Recreating business to have a shared common purpose

Kay would like to recreate businesses to what they used to be like in the 50s and 60s where they had a shared common purpose and were building back better after the war. It was only in the 1970s, he explains, when the intellectual climate started to change and businesses started to become more individualistic.

He says: “A group of rather rich men realised that promoting think tanks and academic research was in the long run a very effective way of changing the climate of opinion to their advantage.

“It was a program. It's a fairly conscious program and it was an extremely successful one, that also amplified the way in which individualistic political philosophy became dominant as a school [of thought].”

What does the future holds when greed is dead?

Kay does not think greed will ever be completely dead. He says: “There have always been greedy people and psychopaths since the beginning of time, but generally they've been socially disapproved of.

“The idea that we want to have them running businesses or our finance sector or our politics is a new idea and a very bad one, one we need to get over as quickly as possible.

“The purpose of business and finance is actually to serve the public not to serve the interests of the people who work in it.”


Log in to CFA UK Discover to watch the full webinar. 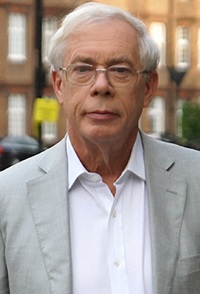 An Interview with Justin Onuekwusi, CFA

How CFA UK volunteers give back to the investment profession