Tatjana Puhan is Deputy Chief Investment Officer at TOBAM, which became the first European asset manager to launch a Bitcoin fund in Europe in 2017. For CFA UK’s ‘In Conversation’ Podcast, Puhan talked to Maha Khan Phillips about sustainability and cryptocurrencies, technological innovation, and what the future may hold in a blockchain world.

As the investment industry increases its ESG targets, a key topic concern has been whether cryptocurrencies can ever truly be sustainable. Tatjana Puhan, Chief Investment Officer at TOBAM, talked about demystifying some of the assumptions around cryptocurrencies, and mining in particular.

She argued that mining activities are actually more flexible about what energy sources they use than is often assumed. She also highlighted the Ethereum blockchain’s decision to move from a ‘proof of work’ model - which requires significant computational effort - to a ‘proof of stake’ model, which eliminates the need for mining new blocks, with validators staking capital in the form of ETH into a smart contract.

Puhan, who is also a lecturer in finance at the University of Mannheim and an associated researcher at the Hamburg Financial Research Centre, said that TOBAM calculates the annual carbon footprint of its Bitcoin investments and compensates for it, something that investors can do to balance their emissions.

She also spoke about the fact that investors allocate to gold for similar reasons that they allocate to Bitcoin, and that despite all the hype, gold is problematic from a sustainability point of view, with a carbon footprint that is no better, if not worse than that of Bitcoin, with additional issues of human rights concerns in countries where gold mines exist.

“There are huge, huge problems about this, and this is something that nobody talks about,” she said.

She went on to discuss the opportunities of blockchain more widely, and how it can create efficiencies across several industries. “I would compare it to the internet. So, we are today where the internet was, let’s say in the early nineties. This whole space is going to develop, and it’s going to radically change,” she said.

Puhan also talked about the need for regulation as the market matures, but also argued against regulation for regulations sake. “Overregulation can also be bad, and sometimes regulation is a lot of bureaucratic work or you don’t really see the value. So I’m always a little cautious.”

She believes the industry needs some healthy ‘Darwinism’ as it develops, so that resilient parts of the system thrive. “Think about how many inventions people have made, how many different models have been developed that didn’t survive. And I think that’s completely normal when you have disruptive innovation processes. I think we should be open to that, and what I hope for is that the regulator really provides the ground for this innovation to grow and develop.”

She believes that a shake out is inevitable. “We need to be aware that not everything which is in this space is necessarily good, and we shouldn’t just sheepishly assume that [just because] there’s something crypto with blockchain that is great. We should be careful of the risks involved. But again, I think it’s a really great technology that also has the potential to really boost growth for economies. This is also something I’ve been wondering for quite some time. What is going to be the next growth engine for our economies?” she said. 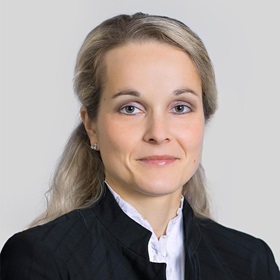