Nearly three decades ago, there were serious concerns about whether the fund management industry would ever take climate change seriously, after governments themselves struggled to get to grips with the issue at the first Earth Summit in Rio. Today, as world leaders convene at a US-led climate summit to tackle the crisis - where the US has vowed to cut its emissions by 50% by 2030 - governments are committed to building on the progress made in recent years. For fund managers, a great deal has changed. ESG funds are forecast to outnumber conventional funds by 2025. Yet some of the challenges remain the same.

In the June 1992 edition of Professional Investor, Janet Dignan argued that, given the corporate and scientific information available, fund managers formulating a green investment strategy would have about as much chance of success as the Earth Summit in Brazil (which took place 3-14 June, 1992, in Rio).

The original Earth Summit, despite being a watershed moment, did arguably did fail in many respects. Developed and developing countries bickered endlessly, and while key UN conventions on biological diversity, climate change, sustainable forestry and desertification were introduced, governments failed to implement them properly.

In her article, Dignan argued that the chances of fund managers and analysts getting green investing right were probably no better than the efforts of the politicians in Rio. A key issue was disclosure – one issue was that the EC’s ‘Eco-Audit’ scheme was voluntary at the time.  “… Until companies are obliged to eco-report in detail, it remains virtually impossible to ascertain which are the worst polluters, for example, and therefore most likely to suffer from the intensified polluter-pays stringencies of the future,” she argued. 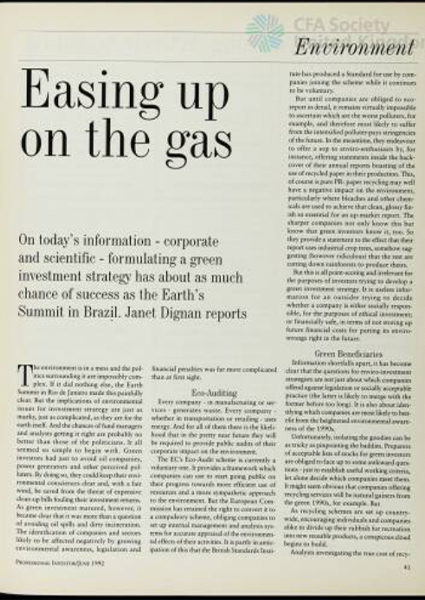 What investors can learn from Bill Gates’ climate warning

Are fund managers paying enough attention to the structural shift in the global energy system?

Oil and gas: to divest or to engage, that is the question

Brishni Mukhopadhyay, CFA from the ESG Certificate Panel explores the investment decisions made around the Oil and Gas sector