From the archives: Ethical investments: A growing awareness

The asset management industry has embraced ESG considerations. But it’s worthwhile to remember the long process – and the people - that got us here.

25 years ago, Professional Investor interviewed Charles Jacob, MBE, a pioneer in the field of ethical investing. At the time, Jacob was director of Friends Provident Life’s Ethical Investment Trust, which had launched a decade previously.

But Jacob’s interest in ethical investment went back much further than this. He had first proposed the launch of a UK ethical investment product to be sold to the public in 1973, but was denied approval on more than one occasion by the Board of Trade, with concerns about a lack of consumer demand for ethical investments, among other things. Later however, he received support from the Stock Exchange chairman, Sir Nicholas Goodison, who persuaded the authorities to allow the development of an ethical unit trust. That trust was finally launched in 1984 under the auspices of Friends Provident. At the time, there were still concerns that ethical investing was not meeting the obligation to seek the best return possible for investors, and should therefore not be sold.

A decade later, in Professional Investor, Jacob was optimistic.

“I have hope for a greater awareness and consideration of ethical issues, not only from unit trust and investment trust groups, but also from all investment institutions as an integral part of their basic investment philosophy. I remain convinced of the potential growth in ethical and green unit and investment trusts, and would not be surprised to see the amount directly invested in them to be well over £2 billion in ten years’ time.”

A quarter of a century later, Jacob has been proven right. Perhaps even he would be surprised though, at just how far ESG has come. Global sustainable investing assets surged to $30 trillion last year, according to the Global Sustainable Investment Alliance. 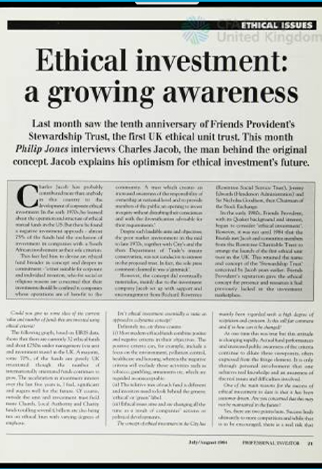 From the archives ethical investments a growing awareness