From the Archives: Forecasting and investment analysis

In 1970, PJ Coen was calling for the investment community to build better forecasting models, and to embrace the world of computing to support that aim.

How should investment analysts do this? By exploiting developments in the world of computers, and by building statistical forecasting techniques to provide really improved service, according to Coen. In general, he said, the use and knowledge of computers was lagging, and there was a gap between the scope and achievement of computer applications in investment analysis and investment management in Britain.

Now, nearly forty years later, the rise of black box and quant strategies and forecasting models have changed the asset management industry forever. But Coen made it clear that the rise of quant did not mean that investment analysts could rest on their laurels. “…I hope that I have not given the impression that one can feed larger volumes of data into a computer and wait for forecasts to emerge. The analyst cannot abdicate his analytical role, but he can be support by computers,” he argued. 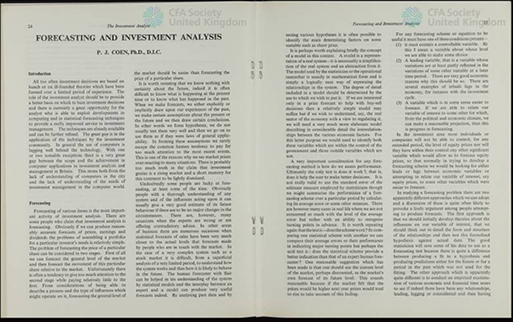