From the Archives: Performance Resistance

In April 2005, Professor Ian Tonks made a strong defence for active management, at least over a one-year time horizon. As the active/passive debate continues, his analysis makes interesting reading.

In August 2019, the investment industry hit a landmark: US passive investment funds topped active funds in assets for the first time. The milestone would have surprised nobody who has been involved in asset management for the last decade. Investors have increasingly flocked to cheaper, index-linked products in the wake of the Global Financial Crisis.

Active managers have come under scrutiny for their fee structures, their transparency, and concerns about ‘closet tracking’. High profile failures, such as that of star manager Neil Woodford, caused many industry participants to question the role of active management in investing more broadly.

While the Financial Times has suggested that 2020 will not be kind to asset managers (FT article) others are predicting that it is the year that active makes a comeback.

But as the debate continues to rage, it’s worth being reminded that it is not a new issue. In the April 2005 issue of Professional Investor, in an article entitled Performance Persistence, Professor Ian Tonks assessed the performance persistence of individual fund house, to look at whether it was possible for a pension fund trustee to identify fund management houses that consistently outperformed their benchmarks.

"At the most fundamental asset allocation level, the conclusion of the analysis of the distribution of returns will aid trustees in their decision as to whether to invest their pension fund monies in an active or passive vehicle,” he said.

His conclusion was that active fund management counted. Having measured the abnormal return generated by fund management houses in managing equity portfolios of UK pension schemes over the period 1983-1997, Tonks concluded that there was evidence of ‘significant performance’ of fund managers at the one-year time horizon, using a number of different consistency tests. There was also ‘weaker evidence’ of performance persistence at longer term intervals.

However, Tonks acknowledged that performance persistence over a one-year time horizon was a complicated thing for a pension fund trustee to grapple with. “An implication of these results might be that a pension fund mandate should be set up on a yearly basis. However, this would ignore the substantial transaction costs involved in shifting a pension fund’s assets from one fund manager to another at such regular intervals,” he concluded. 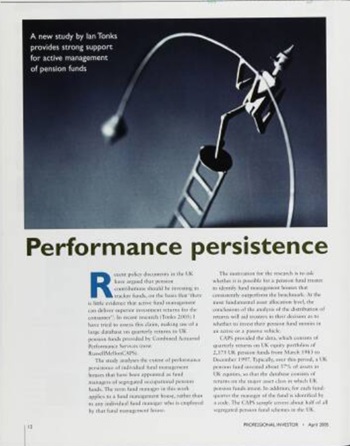