First expounded by Eugene Fama in 1970, the Efficient Markets Theory underpinned financial markets until the Global Financial Crisis (GFC). But for some practitioners, it never truly made sense

Until the Global Financial Crisis, the Efficient Markets Hypothesis (EMH) was widely regarded. After the crisis however, the EMH met with a significant number of critics. As far back as the the September 1974 issue of The Investment Analyst, however, R W Bethlehem shared some of his concerns about the EMH.

Either the EMH is right, or it is wrong, he argued. In Bethlehem’s opinion, the EMH did not offer an ‘entirely satisfactory’ explanation of real world stock markets, which meant its shortcomings couldn’t be dismissed. Bethlehem studied fundamental analysis and its connection to portfolio selection. He believed that the three basic assumptions of the theory, namely: that secure price changes are random, rather than systematic; that prices reflect all relevant known information; and that it would not be possible for investors to beat the market consistently, made little sense.

“If the EMH is valid, the whole field of technical analysis can, in the words of Gilbertson and Roux, be of no value to investors, while fundamental analysis ‘cannot be expected to allow superior investment performance’”, he stated.

Though Bethlehem cited a number of reservations related to the nature of the empirical research, to the applicability of EMH to world stock markets, and to the hypothesis itself, he did however not want people to dismiss it entirely.  “Though evidence of non-randomness in the behaviour of share prices supports the contention that stock markets often fall short of the ideal of efficiency, it does not provide ground for rejecting the hypothesis in the semi-strong sense. Prices might still reflect available information sufficiently to preclude most investors, lacking in adequate analytical resources, making superior profits consistently,” he said. 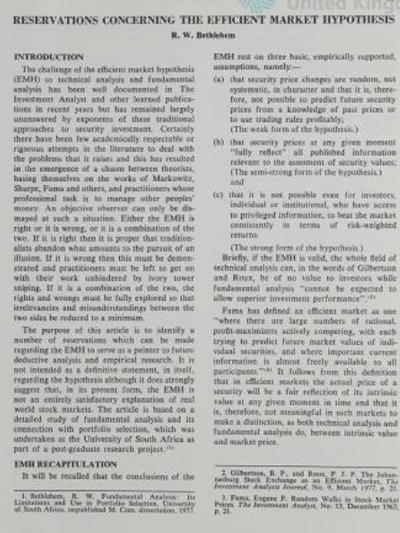 Is agriculture 4.0 an investment play? Agriculture is structurally changing, and that will bring opportunities for investors, says Lars Kalbreier, CFA.

From the archives: the limits of competition

From the archives: the limits of competition

From the Archives: Behavioural finance and economics