From the Archives: The stock market response to voter opinion polls

In the January 1987 edition of The Investment Analyst, R S Thompson and C Ioannidis sought to examine whether markets prefer conservative governments.

As the US Presidential elections are upon us, we look back at an article published by Professional Investor’s precursor, The Investment Analyst, in 1987. The authors looked at various research to see whether they could reveal whether any political preferences of the market could form the basis for a profitable trading rule.

R S Thompson and C Ioannidis set out what they saw as the ‘received wisdom’ of the Stock Exchange. In both the US and the UK, it was widely believed that the markets preferred conservative governments, responding more positively to a Republican and Tory win to that of the Democrats or Labour. The duo tested the validity of this assumption, and found that it was, indeed, correct.

The stock market preferred Conservative administrations, and as a result, responded positively to new information indicating the probability of a Tory win or re-election. However, since the beginning of its sample period of 1960, there was a ‘considerable increase in the number of competing opinion forecasts.”

The world has changed almost unrecognisably in the last 33 years, not least because of the speed in which technology has enabled market movements, and the access and way political news is communicated. Whether the authors’ assumptions all those years ago will play out once again in US politics remains to be seen. 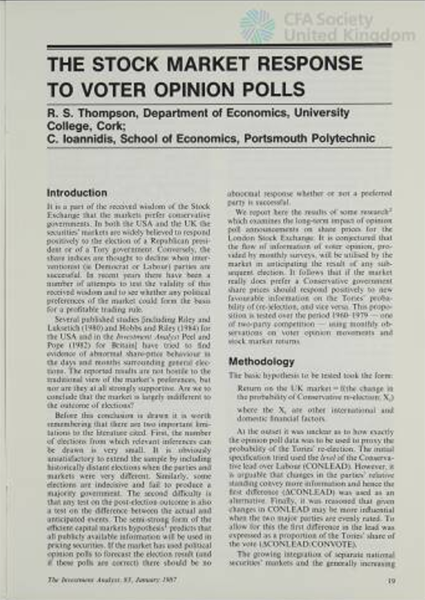