Geopolitical Risk and the Investment Landscape

Aneeka Gupta, CFA, is Director of Macroeconomic Research at WisdomTree. In CFA UK’s ‘In Conversation’ Podcast, Gupta talks to Maha Khan Phillips about the rising spectre of geopolitical risk and its impact on the investment landscape

The Russian/Ukrainian conflict, a rise in protectionism and growing tensions between the US and China are some of the geopolitical headwinds that are going to have long term ramifications for the investment industry, believes Aneeka Gupta, CFA.

Speaking to Maha Khan Phillips for CFA UK’s In Conversation podcast, Gupta highlighted that political tensions are increasingly global. “This is such a multifactorial issue, but I think what is interesting for me is that there have been political risks or political events or wars that have been quite localised, where the investment industry has been able to sort of say, well that’s happening somewhere else. And this is not our problem. Now, when you look at something on such a large scale as Russia/Ukraine, or the tension between the US and China, these are not localised issues,” she pointed out.

Gupta said that should geopolitical risks escalate; investors were in danger of being caught off guard. “Investors should be finding defensive assets,” she said.

She believes that investors with large international portfolios should be particularly taking political risk into account. “I think investors should maintain a more diversified portfolio in order to avoid any specific political risk. I believe diversification should include hedging their risk,” she said.

She also argued that traditional portfolio management has failed. “In 2022, we witnessed, unfortunately, the death of the 60/40 portfolio, the well-known portfolio where investors have 60% invested in shares and 40% invested in bonds. You know its always widely viewed as a very simple and effective way of gaining diversification and smoothing out the peaks and troughs of the market. However, 2022 was one of these years where the strategy just had the worse returns on record.”

Closer to the home, Gupta highlighted events in the UK political arena. The decision around who becomes prime minister is extremely important for what comes next, she suggested, as policy makers battle the spectre of recession and high inflation, and political decisions impact macroeconomic outcomes. “Which battle do I fight first? Do I take on the inflation battle, or do I take on the growth battle? It’s a really tough one, but at the same time, you’ve got policies based on whoever wins the election,” she said.

Further afield, she is keen to look at how the US navigates its relationship with Taiwan, and whether China will retaliate. “The path we are seeing is that the US is only looking to strengthen ties with Taiwan, and China is deeply against that happening,” she said.

Gupta is also concerned about how much further disruption the Russian/Ukrainian conflict could have more widely. “People across the world are being faced with rising energy bills and higher food costs, exacerbated by the war in the Ukraine,” she said. 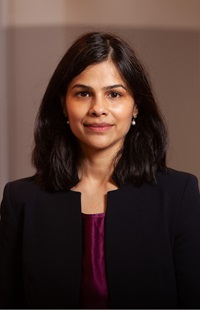