Do the biggest UK equity funds end up king of the performance charts?

Herding is a behavioral bias which causes the grouping of thoughts or actions; it is a common and natural bias caused by the fear of being an outcast and the perceived safety in conformity. Herding often occurs to the detriment of rational thought and within financial markets results in a tendency to align with consensus. Fund investors provide no exception to this behavior – and here I investigate whether or not this has been to their detriment within UK equities funds over the last 20 years.

In addition to the behavioral element, this topic is becoming increasingly relevant as the global regulatory environment seems to be driving investors towards fewer investment service providers. Barriers to entry are rising as higher fixed costs and reporting requirements make it harder for new and smaller competitors. Figure 1 shows how the total assets held in the largest 10 UK equity funds has outstripped growth in market performance over the past 20 years. 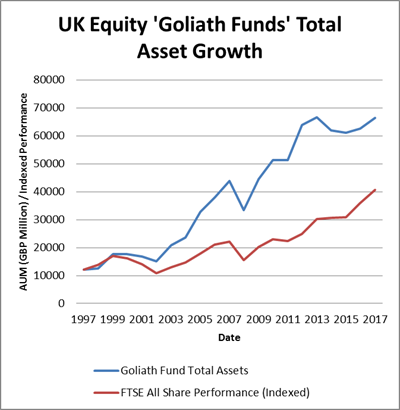 In trying to find the most skillful fund managers to trust with clients’ money, I have observed that even the most proficient professionals come unstuck by what I believe to be a size issue*. Having seen an increasing number of situations where the biggest funds in various asset classes struggled to outperform more nimble competitors, I wanted to investigate the impact of this further. Here I used Morningstar’s vast history of data for UK equity funds. I concede that there are many shortcomings in any study of this sort, (such as data shortages, fee differentials, survivorship issues) but I have attempted to limit these as much as possible, for example by using data for funds that have since been liquidated.

Groupings were then created dependent on fund size –dividing the universe of funds into 3 groups for each calendar year:

The ‘Goliath Fund’ definition was taken simply as a convenient means to focus on the crowding at the top of peer groups. Ten funds also provide some diversification to help avoid situations where one fund with exceptionally strong or weak performance may skew the group’s average. By chance it happened to be approximately 10% of the first year’s total number of funds and a fairly consistent percentage of total assets from each year, as shown in Figure 2. 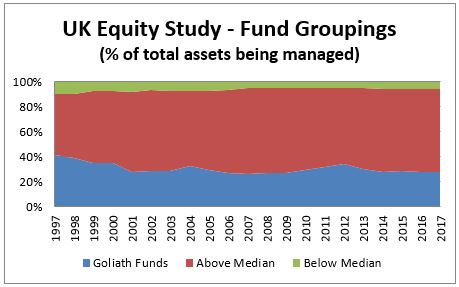 The subsequent one, three and five years’ performance relative to the FTSE All Share Index for all of these funds was then examined, taking the mean for each group. This provides 20 one year, 18 three year and 15 five year observations of how the Goliath funds performed versus their smaller peers. It seems obvious, but it is critical to look to future achieved performance, unlike much of the attention that gets paid to how well the largest blockbuster funds have performed in the past. It is no surprise that the largest and fastest growing funds have performed well in the past and that this will be widely reported and celebrated, but our question is; does this matter for the future/current investor?


The results are presented in Figure 3 and are quite stark. Over the very short term (1 year forward), there seems to be little separating performance by fund size grouping; between the top two groupings there is only 7 basis points difference. The most extreme comparison is between the smallest size fund grouping and the Goliath funds, with the former on average outperforming the latter by a staggering 5.31% over the subsequent 5 years. But perhaps most interesting is the consistent trend that Goliath funds really do seem to struggle over time against both other groups. Furthermore the outperformance of the smallest size funds across the three forward looking periods is also supportive of the view that there is a negative relationship between fund size and future performance, at least within UK equities.

There are many reasons that may explain the differences presented here, but the most obvious one is the limitation that capacity presents. In particular, bigger funds struggle to gain meaningful exposure to small and mid-cap stocks, something that has been important given the outperformance of small/mid-caps in the UK over the last 20 years. If a fund manager faces practical investment restrictions due to the size of their asset base, it is uncontroversial to suggest that this must be a disadvantage versus others without this limitation. This is something that investors and fund researchers often pay attention to, but to which they probably assign differing degrees of importance.

One way to investigate this is to assess the number of equities a fund manager is able to choose from. Figure 4 shows how the opportunity set changes with the size of assets being managed assuming that a fund manager will hold up to 5% of a company’s market capitalization. Under this assumption a fund managing £1.5 billion could theoretically pick from 352 potential investment opportunities, whereas a fund managing £4 Billion (similar size to the smaller Goliath Funds currently) can pick from just 191. 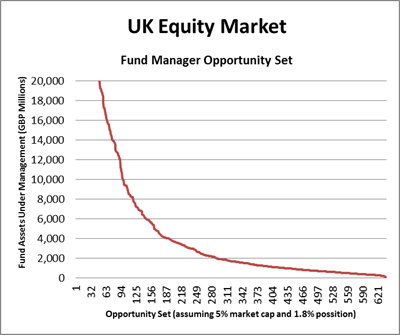 This illustrates how the largest funds are explicitly more limited in the number of choices available to them. And more limited choice is something that acts as a constraint on performance.**

In conclusion, the largest ‘Goliath’ funds in the UK Equity market have tended to underperform nimbler funds on average over the last 20 years. There also appears to have been a negative relationship between fund size and future outperformance in this market. There are clearly exceptions within these groups, with a number of Goliath funds who have defied these statistics and go on to perform very strongly; however the analysis presented here suggests this is the exception rather than the rule.

* The academic work in this field is somewhat supportive of this observation although the conclusions are mixed. Recent work on this topic has reached similar conclusions:
Scale and Skill in Active Management - Lubos Pastor, Robert F. Stambaugh, Lucian A. Taylor. NBER Working Paper No. 19891 Issued in February 2014
**Introduced by Grinold (1989) but further expanded by Clarke, De Silva and Thorley (2002) (CFA – Portfolio Management Active Equity Investing)

Is agriculture 4.0 an investment play? Agriculture is structurally changing, and that will bring opportunities for investors, says Lars Kalbreier, CFA.

From the Archives are qualifications really necessary?

The days when an Eton and Oxbridge graduate with a third class degree in Classics could walk into the City of London were long over, even in 1995, according to Peter Temple.

From the Archives: Can Europe continue to attract invest?

Europe, and the UK’s position in Europe, has been a source of divided opinion for decades, with this article from a quarter of a century ago demonstrating just how complex the issue continued to be.