The fear of greenwashing – or rather being seen to greenwash – runs deeply through asset management firms, says Miles Donohoe

The huge inflows of capital into sustainable and ESG-related funds has continued unabated in recent years, with data compiled by Morningstar showing that by the end of June 2021, total assets in ESG and sustainable funds had climbed to an astonishing $2.3bn, still led largely by demand from European investors.

Yet as demand has continued to increase, so too has scrutiny of the industry and what ESG, responsible or sustainable investment really means.

The 2021 edition of JPES Partners’ Asset Management Trends Report, which surveys senior professionals at global and European asset management firms on a range of marketing and business issues, found that greenwashing remains one of the biggest concerns.

76% of the firms surveyed said they had concerns about greenwashing by the wider investment industry; albeit that this was a near-20 percentage point drop from the 94% who said the same last year. One of the reasons that was provided for this slight easing of concern about the extent of greenwashing in the industry was the introduction of the Sustainable Finance Disclosure Regulation (SFDR) regime in March 2021, which imposed transparency and disclosure requirements on asset management companies. 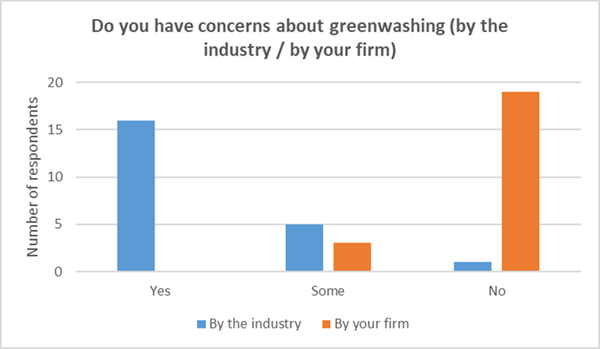 
While some respondents felt that compliance with these requirements would limit any manager’s ability to greenwash in the future, others believed the fact they were self-classifying their own status on funds meant that they were actually being overly conservative on the SFDR classifications. “Clients don’t want to see too many of our funds at Article 8 because they’ll think it’s greenwashing.”

When it comes to fears of greenwashing at their own asset management firms, however, the very opposite was true, with 86% saying they had no concerns at all.

Of the few outliers on this point, interestingly it was one of the specialist ESG managers who said that a rise in articles with a critical tone of voice on ESG, and referencing greenwashing, was causing some concern. “Are there any areas within our company where we could be accused of greenwashing? Yes we’re one of the frontrunners [on ESG] but we’re not perfect; there may be some areas where we could do better and you could still argue that if you're not green enough, then you're greenwashing.”

This fear of greenwashing – or rather being seen to greenwash – runs deeply through asset management firms, with many saying it has led to them being far more reticent about being too publicly vocal on the topic, unless they have absolute confidence that they can back-up what they are saying.


Reasons to be optimistic

There is a healthy dose of optimism about what their firms are achieving though. For the first time since the report started, no asset manager viewed themselves as being behind the curve on ESG. This has been a continued trend in recent years, as managers have become increasingly confident in their own credentials and capabilities. In fact, two thirds of the asset managers surveyed in 2021 believed their firm was either a pioneer or an early adopter of ESG investing.

But the ESG debate is complex. While some may lead on specific environmental issues such as biodiversity or microplastics, for others good governance and diversity at a board level is most pressing. There is one theme, though, which does seem to garner cross-industry support: Climate.

When asked what subset of the ESG debate they were most focused on, climate was overwhelmingly the top response given by over 40% of respondents, compared with just 17% doing so in 2020. Of those who said climate was a key area of focus for their firm, nearly 90% also believed they were moving the needle on the ESG debate.

Increasingly mandated by the government to consider the environmental risks of their investments, many UK asset owners have made it a priority – and where there is a priority, there is an investment opportunity. 86% of the firms we spoke to expect to launch new ESG products in the next 12 months compared with a still very robust figure of 78% last year.

There does appear to be a disconnect, however, between progress that the industry itself believes it is making with regards to ESG, and how other stakeholders view this improvement.

Analysis by InfluenceMap, which was published at the end of August 2021, found that 71% of funds which are specifically marketed using ESG and climate-related key words, had a negative Portfolio Paris Alignment score, indicating the underlying investments were misaligned from global climate targets.

It may be 35 years since the American environmentalist Jay Westerveld first coined the term ‘greenwashing’ but it is only now that the scrutiny on investments has become particularly intense. Not all ESG products, or the managers who run them, claim to change the world; but for those who may be prone to making loftier claims, it should be better understood that the level of risk attached continues to increase the further out they go. 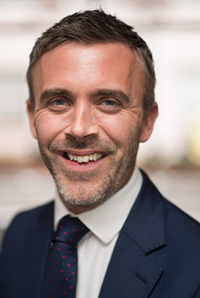 Could active managers raise the bar when running climate-focused funds? Research from Pensions for Purpose has revealed that active managers have a long way to go on benchmarking climate funds, says Chair and Founder Karen Shackleton.