Mark Watts, CFA, is Sector Team Manager at the Financial Conduct Authority, and Trustee Director of the FCA Pension Plan. He talks to Professional Investor about being a poacher turned gamekeeper, and why it’s important that markets operate effectively while minimising consumer harm.

It is rare when a buy-side industry veteran puts on a hat as a regulator, but that is exactly what Mark Watts, CFA has done. Watts, who has run and grown several asset management businesses in different parts of the world, in a career spanning thirty-four years, is now focused on supervision. He heads the Sector Team in Asset Management Supervision at the Financial Conduct Authority (FCA).

“Having grown up on the buy-side pretty much my whole career, and as a commercially-minded and entrepreneurial individual, I wouldn’t necessarily be expected to enjoy an environment like this, but it’s that classic poacher turned gamekeeper turn of events. There’s a huge amount of people at the FCA who are absolutely hell bent on doing the right thing in the right way, and to be able to bring the industry experience that I have gathered for decades now to those discussions has been really enjoyable,” he says.

Watts, who began his journey into investment management in 1987, had front row seats to Black Monday, the stock market crash which took place in October of that year. He says experiencing market cycles has held him in good stead in his current role. “When you have been hanging around the market as long as I have, you see quite a few investment cycles and boom bust scenarios. The Tequila Crisis of 1994, the events of 2008, and even back to the UK’s exit from the Exchange Rate Mechanism in 1992. Those experiences serve as really useful playbooks for future events.”

At the FCA, Watts is responsible for evolving the strategy of the asset management department, executing work to address the key rises of harm identified within portfolios. “We are responsible for making sure that the market effectively operates while minimising consumer harm.”

The advent of cryptocurrencies and the increasing role of ESG assets are both themes that will be important considerations in the future, he suggests. “We are focused on making sure that to the extent that asset classes start to make their way into investment portfolios, that they are done with appropriate disclosures.”

He also believes that fair access to financial markets for everyone will be of critical importance in the future, as will value for money.

At the FCA, Watts is also a trustee director of the regulator’s pension plan. “Having always managed mandates on behalf of pensions, I am now seeing the other side of that coin. It’s valuable to be able to understand why pension funds invest the way that they do, just as its valuable, after a career on the buy-side, to have the regulators perspective.”

Watts cut his teeth in the asset management business at Barings Asset Management, where he worked both in London, and later in Boston, heading up the US fixed income business. In 2005, he joined Morley Fund Management (subsequently subsumed into the brand of parent company Aviva Investors) as head of global fixed income. He was then recruited by European Finance House, at the time a London-based Islamic finance start-up which was majority owned by Qatar Islamic Bank (QIB), to develop and grow the asset management business part of the fully-fledged Islamic bank in London. There, he set up and ran what became one of the largest publicly available sukuk funds. The business was then rebranded as QIB.

In 2010, Watts relocated to Abu Dhabi, initially to set up the fixed income asset management business. He was subsequently appointed managing director and chief investment officer of the asset management group of National Bank of Abu Dhabi, responsible for developing the firm’s segregated institutional business, as well as mutual fund products. After four years in the UAE, he moved back to London to take on the chief executive role at Gulf International Bank, a position he held until 2016.

In January 2017, Watts founded his own alternatives asset management business, Asparta Global Asset Management, while simultaneously working on a tech start-up, Togetherdom, a marketplace app designed to bring together local people who need services with locals who perform the services.

“When you are working full time, you can’t always pursue your ideas, and this was an opportunity to do something different. We are still working on a few finesses to the tech business to get it to the next stage,” says Watts

On top of these roles, Watts also took on non-executive director positions, acted as a consultant to Fintechs, and also volunteered with CFA UK, where he served as chair of the Volunteer Steering Committee. “The whole point of the committee is to make sure that the volunteer experience is as good as it can possibly be. We realised we needed a volunteer experience product, which enshrines all the aspects of what we believe a good volunteer experience should be.”

Feedback from volunteers suggest that there are a whole range of reasons for volunteering, and different benefits that it brings, he says. “Some tell us that they want to give back to the industry. Others want to improve their networks, both professionally and socially, and others want to learn. Volunteering hits all those angles. It’s also a chance to gain some visibility and recognition.”

His advice to new entrants to the investment industry is to have a passion for asset management. “The industry can be demanding from time to time, and if you are passionate about what you do, and you believe in what you are doing, then you’ll do well. The other key point is education. No matter what your path in the industry, at some point there will be professional qualifications. Using professional examinations to give you a baseline on fundamental and technical knowledge is really useful.”

He believes having integrity is vitally important as well. “Doing the right thing, in the right way, is critical. There may be times when that doesn’t work for you personally, because doing the right thing isn’t always rewarded. But in general, over time, it will really support you.”

Mark Watts, CFA, is Sector Team Manager at the Financial Conduct Authority, and Trustee Director of the FCA Pension Plan 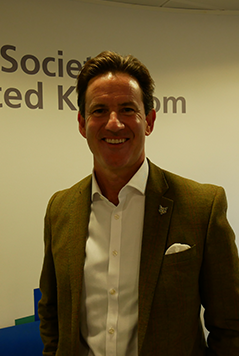 Rick Di Mascio is Chief Executive of Inalytics. In CFA UK’s ‘In Conversation Podcast’, Di Mascio talked to Maha Khan Phillips about the evolution of behavioural finance, and where we go from here.