Acknowledging or even talking about emotions in the workplace is too often a rarity. This is particularly true in the financial sector, where emotion is seen as the opposite of rationality. Gut feelings, intuition and passion supposedly have no place in the cold world of granular analysis of economic data.

As the behavioural economists have taught us, the head and heart are connected: emotions effect decisions which in turn change emotions. This is why the best financial managers are not only okay with feelings and talk of emotions, but know how to regulate their own and other people’s emotions, particularly in times of stress.

Anyone who has just entered the world of investment is usually struck by three things. The first is frenetic stress. People in this industry work very hard, in a landscape with several powerful stressors. They are called upon to make very important decisions with massive consequences in short periods of time.

Some call it ‘hurry sickness’. Everything must be done NOW. The moment passes, the opportunity is lost. Just watching the trading floor is exhausting. Everyone seems to be multi-tasking, juggling many communications media at the same time.

The second is analysis complexity. People watching multiple screens, putting data into complicated algorithms and speaking in unintelligible jargon is an example. Every year, there are new ways of collecting and generating data that hopefully improves decision making. Data generation helps decision-makers to reveal patterns and trends that could explain and predict future events.

The industry is full of very clever people: data supremos who can tumble the numbers, see patterns and apply advanced maths and stats to all problems. But every year the problems seem to get more complex and getting an understanding of the fundamentals gets more difficult. It is another language with very difficult grammar, and there are very few fluent speakers.

The third is the taboo topics: the inherent unpredictability of investments means it could be seen as a form of gambling. The course requirement, some feel, is showing total and complete confidence in the process and the decision making, and not asking any difficult questions.

Doubt is an example of a taboo topic. Nobody likes doubt. Instead, bragging self-confidence is expected and rewarded. The whole purpose of the analysis is to make the inherently unpredictable amenable to smart maths. It can encourage a strange sort of fanaticism where only “one truth” is acceptable. The problem occurs when quiet self-confidence turns into grandiose narcissism. Doubt is a safety warning mechanism. There is an optimal healthy amount, but in the financial world it must be hidden.

Managing stress by letting out feelings is another taboo subject not often not discussed. Feelings are often deemed for outside the workplace. There is no time or place or person or even vocabulary for expressing emotions which have to be “bottled up”. There are accepted ways to “let off steam” but this is all done under the banner of celebrations. Crack open the Bolly; go to Barbados for the weekend. It’s called externalising.  Internalising is seen as a sign of the worst failure.

Work-relationships problems are taboo as well. The hardest thing at work, as any manager will tell you, is not the unstable markets, the difficult customers, the fickle supplier, but it is the staff. People are capricious, irascible and unreliable, as well as kind, hard-working and loyal. Just when you need them most, some staff go off sick or resign. Of course, there are also happy and well-motivated teams that deliver.

So how to anticipate, deal with and smooth over disagreements and disruptions at work? If they are senior with rainmaker potential, call in a coach. But any sort of in-depth, diagnostic interview is seen as a problem.

What sort of people are attracted to this world? And who makes it? The first issue is what abilities and attitudes are required to break into the world. The second is what factors are associated with success and indeed failure. The third, is what to do about it. This refers most to the above.

It will not break the system to normalise a few of the above issues. Expressing false confidence helps no one. Equally, being racked by doubt and indecision is deeply unhelpful. There is a way of expressing doubt which can be reassuring to others who might feel the need to mimic the unhealthy bravado and bravura the culture demands.

It’s also good to encourage people to recognise their own stress and those in others and intervene. Having a team coach may be expensive but worth it in the long run. People make bed decisions when stressed. It’s a good investment to address the issue.

Thinking about morale and “socio-emotional” relationships at work also pays off. Having an engagement survey does not solve the problem. But it can show the size and nature of the problem. Teaching some simple management techniques and counselling skills can go a long way.

It’s all a no-brainer. The investment in heart as well as head can, by clever analysis using the latter, show why the former is important. 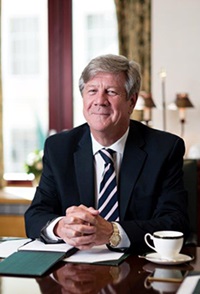 Mental Health and the City

Ahead of World Mental Health Day, Alison Unsted, UK Chief Executive Officer and Global Strategy Director at the City Mental Health Alliance, talks to Professional Investor about the role that businesses and individuals, can play in supporting the development of mentally healthy workplaces.

Are you resilient enough?

How to improve your mental well being while working from home