The ongoing Covid-19 pandemic is the second global crisis of the 21st century after the Great Recession of 2007-08. The consequence of the health crisis has highlighted the need to reform Anglo-American hypercapitalism ideology, which has dominated the economic landscape since the Thatcher-Reagan reforms of the early 1980s. With the Covid-19 pandemic in its sixth month, to prevent a repeat of the consequences of the Great Recession, which resulted in increased levels of wealth disparities, hypercapitalism needs to be reformed.

We are witnessing a 21st century variant of the Gilded Age, with the gap between the ‘haves’, and the ‘have nots’ reaching unsustainable levels. According to Oxfam, the world's 26 wealthiest people have the combined wealth of the world's poorest 3.8 billion people, while the world's 22 richest men have more than the combined wealth of all women in Africa. A key driver of this extreme form of wealth concentration is a hypercapitalism ideology, which has gone mainstream and has remained unchallenged. The doctrine is built on several principles, such as perfect markets, perfect competition, perfect information, labour flexibility, the invisible hand, marginal productivity theory, trickle-down economics and financialisation. These concepts exacerbate wealth concentration and often don't work in real-world situations.

As the impact of the pandemic rages on, it is becoming apparent social inequality is a crucial variable in determining those negatively impacted by the virus. According to the World Bank's Poverty & Equity Global Practice, the poor and vulnerable (including migrants, the elderly and ethnic minorities) are likely to be significantly impacted by the Covid-19 outbreak. According to Omar Khan, a director at Runnymede Trust, ethnic minorities in Britain are at higher risk of dying from the disease due to social and economic inequalities.

An implicit assumption under hypercapitalism is the concept of survival of the fittest, where winners are rewarded, and losers punished. This zero-sum view of the world needs changing. We are in dangerous territory when the choice between life and death is socially determined. The economic and social distance between the 1% and the 99%, need to be closed. According to Thomas Piketty, the French economist, during the period 2000 to 2020, the top decile owned 70%-75% of private property in the United States. In Britain, the top decile held 45% of the wealth while the bottom three deciles held 2% of the wealth.

Another component of hypercapitalism ideology worth challenging is marginal productivity theory, which suggests highly paid people are the ones who contribute most to society and are highly productive. This theory has been the guiding philosophy behind excessive executive remuneration. The High Pay Centre reported that by close of business on 6 January 2020, a typical FTSE 100 CEO had already made the same amount that an average full-time employee would make in the entire year. Between 1978 and 2019, the average American CEO compensation for running America's public listed companies increased by 940%. In contrast, the average wage of workers increased by 11.9% over the same period. During this period though, US productivity grew by 69.6%, and the productivity gains did not translate to increased pay for workers; instead, it went to top executives.

The pandemic has debunked the justification for these substantial pay packets. In unprecedented times like this, it is clear to see which jobs contribute more to society. Every week, millions of Britons stepped out of their houses to clap for the doctors, nurses, cleaners, drivers, carers and others who are risking their lives to fight against the coronavirus outbreak. The term "essential workers" has been repeated frequently. Missing from the roll call of essential workers are the CEOs of large corporations earning astronomical amounts or hedge fund traders making millions of pounds in bonuses. Post-COVID, there needs to be a rethink on excessive executive remuneration, which has contributed to the growing level of inequalities.

Advocates for hypercapitalism laud the benefits of labour market flexibility, arguing it allows firms to adapt to economic conditions by adjusting the wage rate and staff numbers to the business cycle. However, on the flip side, it has led to greater insecurity and low pay. The number of employees working in the UK and USA gig economy was 4.7 million and 57 million respectively. Due to pay uncertainty resulting from the ongoing crisis, workers in the gig economy have to choose between starvation and the coronavirus.

In a hypercapitalist world, the welfare state is frowned upon because it is believed to encourage laziness and impact the economy negatively. Politicians, the media and the general public sometimes use words like welfare queens, scrounger and shirkers to stigmatise welfare recipients. Despite the prior disdain towards benefit recipients, people are coming to terms with the fact they are one pay check, one illness and now one pandemic away from poverty. The objective of the welfare state is to provide a safety net against misfortune and financial difficulties. With the emergence of the Covid-19 pandemic, there needs to be a rethink about the importance of the welfare state as it demonstrates that anyone can fall into tough times unexpectedly.

The furlough scheme introduced by the UK government in the aftermath of coronavirus is for want of a better word a welfare payment. While advocates of hypercapitalism ideology are quick to critic welfare payments to the poor and unemployed, they have little to say about bailouts for the rich and corporations. Through the furlough scheme, the British government, while helping vulnerable employees and small-scale sectors impacted by the pandemic is also indirectly bailing out large corporations. Even Richard Branson, the eighth richest person in Britain, sought a £500m bailout for Virgin Atlantic. Since the start of April 2020, the British government has been paying the salaries of 6.3 million people. Some of these furloughed employee's work for FTSE 100 companies, financial institutions, law and accounting firms. Words like subsidies, bailouts, stimulus packages, tax cuts should be called its appropriate name - corporate welfare. Modern-day hypercapitalism ideology appears to exhibit socialism of the rich and capitalism of poor whereby the former is too big to fail, and the latter is too small to save.

The unfettered market is a crucial pillar of hypercapitalism. It is argued economic outcomes are more efficient when individuals and firms are left to make decisions with limited or no government intervention. While hypercapitalism embraces Big Pharma, Big Technology and Big Banks; there is no role for Big Government. The pandemic has demonstrated the limits of the private sector. The idea that an invisible hand ensures the pursuit of self-interest by firms and individuals benefits the whole society cannot withstand rational analysis. Governments around the world have taken the lead in this pandemic via the provision of healthcare, stimulus packages and furlough. If left to the devices of the invisible hands of unfettered markets, patients inflicted with the virus would be treated based on their willingness and ability to pay. With our health, our political affiliation, our faces, and our fertility monetised under the guise of market fundamentalism, it's time to take a pause and think about what Professor Michael Sandel calls the moral limits of markets.

The service sector has taken a front seat in former manufacturing powerhouses contributing 68% and 84% to the economic output of the USA and UK respectively. The Covid pandemic has revealed the danger in this move towards a post-industrial society. When the coronavirus spread globally, personal protective equipment (PPE) used by health workers became scarce. As the UK started to run out of PPE supplies, the British government had to source the equipment form Turkey. The Mexican medical device industry experienced an eleven-fold increase in demand for ventilators as coronavirus cases increased in Europe and America. The scarcity of medicine used in the treatment for the virus has led to countries implementing export restrictions, thereby disrupting the pharmaceutical global supply chain.

A consequence of the financialisation taking place in some developed economies is it diverts resources, which could have been used to build up the real economy. Financialisation should be a means to an end rather than an end. The Great Recession revealed the danger of focusing heavily on finance. Emerging economies should be cautious about calls to adopt a service-led model; instead, the countries should consider implementing a manufacturing-based growth model, which has proved successful in economies like China and Malaysia.

Based on the current trajectory, a hybrid of surveillance capitalism and hypercapitalism will continue to prevail. Unsurprisingly, companies are placing workers on furlough with the top echelons exempted. In the event of the health crisis morphing into an economic depression, inequality will worsen, while Big Technology would emerge as the clear winner, thereby increasing its monopoly power.

In the 20th century, two world wars and a Great Depression left the world in a bad state; in response, some governments implemented radical reforms which ushered a period of stability, reduced inequality and growth. Countries experiencing a high level of wealth concentration should introduce a range of policies such as campaigning, revolving doors and lobbying reforms, progressive taxation, increased government spending on education, health, infrastructure, representation of workers on company boards and a more robust trade union to rein in hypercapitalism. Failure to press the reset button on hypercapitalism in the aftermath of the pandemic could lead us to the road of despair and anarchy. 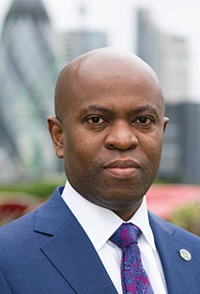 Ahmed Sule, CFA is a London based financial analyst, writer and social critic.