Rayna Lesser Hannaway, CFA, is a portfolio manager and analyst at Polen Capital. She talks to Professional Investor about her career, her investment philosophy, and about key lessons she has learnt along the way.

Rayna Lesser Hannaway, CFA, was first exposed to the workings of the stock market as a teenager. “I had an economics class, and one of the projects that we did was that we had to join together in teams and pick a company that we had to investigate. I had the good fortune of being paired with a guy in my class whose father was in the investment management business. I actually knew very little about what we were doing, but it was all really interesting,” she says, smiling.

Lesser Hannaway, who has now been working in the investment industry for 25 years, went on to study economics at Barnard College. A head hunter then introduced her to a portfolio manager at Lord Abbett, the independent investment manager. “At the time, he was looking for an assistant. It was a lot of grunt work, but he and I really hit it off, and he was an amazing mentor to me. He was at that point in his career where he was focused on giving back, and saw it as part of his purpose to help other people learn and grow. That was really good fortune for me,” she says.

Lesser Hannaway quickly climbed the ranks, becoming a full time analyst within a year. “I was just twenty-two, and all the other analysts were in their forties, but I had demonstrated an interest in the internet, in software and IT services. In the nineties, that really differentiated me.”

She studied the CFA Program at the time, encouraged by her mentor. “He was also a CFA [charterholder] and not a big fan of the MBA path, so it was an easy decision for me. As a young analyst, when I sat down at the table people would often say ‘are you the only one coming to this meeting?’ because I was really young, so the CFA helped me establish credibility.”

After four years at Lord Abbett, Lesser Hannaway went on to join Jennison Associates as an analyst in 2001. “I worked on a core portfolio, but I also covered healthcare, which was a unique experience in the early 2000s as many companies were just coming out of bankruptcy. It was a good experience for me in terms of perspective around building and understanding the importance of quality in a business,” she says.

In 2005, she moved to Fidelity as a primary analyst covering multiple sectors for the firm’s small cap team. She went on to become an assistant portfolio manager, and then a portfolio manager managing concentrated, sector specific portfolios in the technology, telecommunications, and consumer sectors, as part of Fidelity’s multi-manager portfolio.

“At Fidelity I really fell in love with this idea of concentrated investing,” she says. She joined Polen Capital in 2017. “I found I was really able to bring together all of the things that became my investment philosophy over time. It’s this combination of growth and quality and concentration and long holding periods. I work on our US focused small cap and mid cap strategies. We really dig into our companies, and we have a collaborative approach on our team. Analysts work alongside portfolio managers,” she explains.

Her philosophy means allocating to companies that are built to last. “There are a lot of companies in the small cap universe that are either serial small caps, or they are at risk of bankruptcy. Forty percent of the universe is unprofitable. I learnt the hard way what it means when a company doesn’t have financial flexibility, and when I think about what matters the most, it’s that companies have to be uniquely positioned and have a repeatable sales process that is driven from skill rather than luck, and they need robust business models, with a long term focus on everything that they do.”

One of the key lessons she has learnt, that she would pass on to those who are just starting out their careers, is the lesson of humility. “I believe that being humble really helps to keep investors open minded to observing change. I have seen so many investors who were at points in their career very successful, but then let their egos get in the way, or they had a hard time updating their views over time. The thing is that we all did well in school, we all got good grades, we all succeeded most of the time. But even the best investors in this business are only right fifty to sixty percent of the time. You are wrong the rest of the time, and you have to make room for thinking and reflection. You need to learn from your mistakes,” she argues.

Lesser Hannaway’s experience has also led her to believe that women can thrive in fund management. “Women make very good investors. They are calm and balanced in how they think about risk. They are very good at staying focused for the long term.”

She wants to see women take more leadership roles in the industry, and serve as role models for younger generations. “We need to embrace diversity and celebrate that diversity externally, we need to take bias out of the hiring process, and we need to step up and mentor women. I’m a firm believer in women supporting women,” she says.

At Polen Capital, Lesser Hannaway is co-chair of the resource group WISE, (Women Inspiring Success and Engagement). “I feel like I really have a voice and can have an impact in this area, and I think one of the problems is that we need more women to choose this as their careers. It means getting out there and helping to evangelise is important, and partnering with women early is important, whether that’s in high school or college or business school. Many women grow up in environments where they don’t have exposure to women as financial decision-makers, and that can have an impact when they compete against men for jobs. We need to help change that.”

When she’s not working, Lesser Hannaway likes to spend time with her family. “I have two little boys, they are my everything and bring me so much joy. I feel lucky to be at Polen Capital, where we have a results only environment, which means I can show up for them but continue to pursue the career that I love,” she says.

She is on the board of her children’s school, and also involved in two youth organisations. “I believe that it’s important to give back in a way that can have a lasting impact on our society,” she says.

Rayna Lesser Hannaway, CFA, is a portfolio manager and analyst at Polen Capital. 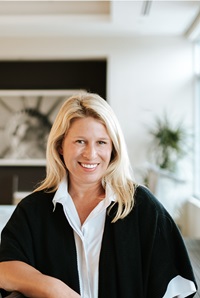