What the 'prisoner's dilemma' tells us about climate change

Marc Hassler, sustainable investment analyst at Schroders, uses game theory to help explain why action on climate change has been slow. However, as protests worldwide gain momentum and interest in climate change grows, we could be nearing a tipping point, he argues.

The prisoner’s dilemma is a well-known framework in game theory, which is the study of how and why people cooperate or compete with each other.

According to the prisoner's dilemma, rational individuals might not cooperate even though it would be in their combined best interests to do so. By prioritising their personal interests, individuals acting rationally can create a worse overall result.

In the context of global climate change, the prisoner’s dilemma has become more relevant than ever.

It helps us understand why nations across the world have postponed actions to limit further temperature rise for such a long time, despite scientists’ warnings of the risks ahead.

Climate change is a global problem, which requires individual action by many people, companies and countries around the world. The costs are global and result from the world’s collective actions. They will also affect future generations far more than today’s. Because the actions required are disruptive, most people will choose to let others take the strain, leaving the global problem unaddressed.

Over the recent past, however, the payoffs associated with each player’s action have started to change. The costs of taking action have fallen and the benefits of addressing climate risks have become clearer. That has prompted an increasing proportion of the global population to forego self-interest and choose collaboration.

One prominent manifestation of this is the rise in public protests drawing attention to climate change on a global scale. The Fridays-for-Future movement initiated by Swedish teenager Greta Thunberg resulted in over 2000 protests in 125 countries in a single day, demonstrating the increasing demand for solutions among younger people.

The recent Extinction Rebellion protests in several European cities are another example of people’s choice to collaborate instead of putting self-interest first. The 10-day protest was a forceful call for political action and collaboration on an unprecedented scale. 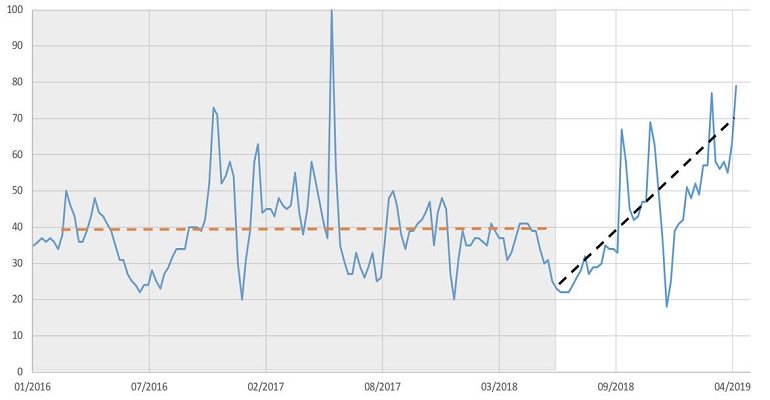 The Google Trends data above also confirms the attention climate change attracts. The trend line in “climate change” searches has historically been flat, albeit with seasonal peaks and troughs, and the spike during the much-publicised Bonn Climate Change Conference in May 2017. But over the past 12 months it has been steadily growing.

Time will tell, but we believe a tipping point may be approaching. In game theory, the solution to the prisoner’s dilemma framework changes when time and repetition are considered. As costs and benefits change, collaboration becomes the optimal solution for rational actors. The sight of school children and older generations on the streets, demanding action, may prove the start of a snap back from the world’s political apparatus.

This article was first published at Schroders.com

An Interview with Tina Adatia, CFA

DEI in the Investment Profession