Why research is the foundation of alpha

Research is the cornerstone of any investment process. It is where ideas get investigated and how the best of them get into the portfolio. This paper validates the importance of the research process by demonstrating the clear link between a successful research process and alpha generation, across both active equities and fixed income credit portfolios.

By investigating the purest form of research – opening buys – the analysis found that:

These findings show that research is the foundation on which fund managers generate alpha and build successful track records.

This paper also highlights the importance of asset owners evaluating the research process of managers as part of their due diligence and monitoring process, and the need for asset managers to develop a clear, consistent research process if they are to generate alpha. From an industry perspective, having proprietary in-house research is becoming ever more important given the relative demise of sell side research compared with the past.

Research in its purest form is crystallised when a new idea gets introduced to the portfolio for the first time, which we refer to as an opening buy. By analysing each time a new name is added to the portfolio, we are able to see how consistently successful the research process has been at identifying and adding winning positions to the portfolio.

That is not to say that ongoing research doesn’t play an important role in managing existing positions, but an opening buy is the purest and cleanest measure to capture the research process.

In order to best investigate the relationship between opening buy decisions and alpha, the portfolios were split into two groups: those with positive and those with negative alpha.

The quality of opening buy decisions is captured by two measures;

The post-trade relative return of the stock between the date of the trade and 12 months after, and the Hit Rate. The Hit Rate, in this case, is the percentage of opening buy decisions that generate a positive post-trade relative return. Clearly, if opening buy decisions on average outperform and if the percentage of decisions is higher than 50%, then it is safe to say that the research process is successful.

The table below provides the percentage of each of those groups in the Inalytics Peer Group exhibiting positive results on each of the two measures of success at opening buys.

These findings were complemented by a recently completed review of 26 fixed income credit portfolios on behalf of a client where, although the sample is small, the results remained remarkably consistent, demonstrating the importance of research irrespective of asset class or market.

The following graph illustrates the importance of the relationship between portfolio alpha and the research process as captured by opening buys.

We can see in the chart below that the stronger the post-trade relative return of opening buys, then the higher the portfolio alpha. 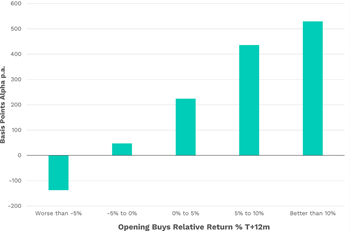 The relationship is monotonic, and for those portfolios with better than 5% post-trade relative return on opening buys, positive portfolio alpha was all but assured.

Further confirmation of the relationship comes from this scatterplot, in which the average post-trade relative return of opening buys is plotted on the x-axis, and the annualised portfolio alpha in basis points on the y-axis. 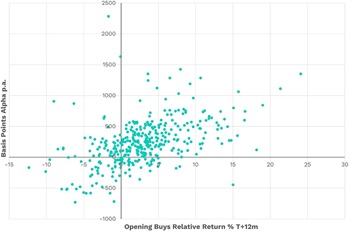 A regression shows that every additional 1% post-trade relative return on opening buys is associated with a 34 basis points p.a. increase in alpha.

This paper provides clear evidence of the link between a successful research process and alpha generation. The findings and analysis have implications for the way asset owners conduct due diligence, and how asset managers focus their resources to generate alpha. 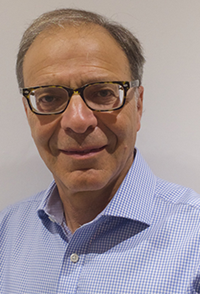 2021 saw plenty of political, social, and economic upheaval globally, and ended with the rising spectre of the Omicron variant. But what will 2022 bring? Leading industry
professionals talk to Professional Investor about the key themes and challenges that will dominate the coming year.