Why the first investment company matters

Foreign and Colonial’s Investment Trust is the oldest surviving collective investment vehicle in the world. Its launch was truly innovative, and it still offers lessons for institutional investors today, argue Nigel Morecroft and David Chambers.

The Foreign and Colonial Government Trust (FCGT), an investment company, or closed end fund, was launched on 19th March 1868 and was instrumental in shaping today’s asset management profession. Having widened its investment powers and changed its name in 1891 from ‘government’ to ‘investment’ trust, The Foreign & Colonial Investment Trust (FCIT) is the oldest surviving collective investment vehicle in the world, having enjoyed 150 years of continuous investing.

At the outset FCGT had two distinctive features. It was the first time that investors had been presented with a collective investment vehicle. Additionally, for the first half century of its existence it constituted an emerging market bond portfolio. This short article analyses these two features of this innovative investment company from its origins to the outbreak of the First World War and considers the lessons for institutional investors today.

FCGT/FCIT was the first collective investment vehicle to be offered to multiple investors such that they could pool their relatively small savings into a single larger fund which, in turn, held a diversified portfolio of individual securities. Consequently, the middle-classes, and not just the very wealthy, could now access a range of securities issued by governments and firms in remote geographies which would not otherwise have been available to them.  FCGT’s first prospectus captured the intention in the clear prose:


The object of the Trust is to give the investor of moderate means the same advantages as the large Capitalists, in diminishing the risk of investing in Foreign and Colonial Government Stocks, by spreading the investment over a number of different Stocks, and reserving a portion of the interest as a Sinking Fund to pay off the original capital.

The need for such a vehicle arose from the long decline in the yields on British government bonds from 6% in 1800 to half that level by the 1860s. British savers were now searching for higher yielding investment alternatives without taking undue amounts of risk. Overseas bonds were an obvious possibility. However, transaction costs were high and a listing on the London Stock Exchange provided very few safeguards for private investors. While insurance companies were well-established in Britain, and life assurance had grown rapidly during the nineteenth century, they did not offer investment products suitable to meet investor needs.

When launched in 1868, the FCGT promised a 7% yield and provided the very investment solution which such savers craved. Its structure, albeit slightly simpler, was closely modelled on the Dutch investment fund, Eendragt Maakt Magt which had been established a century earlier. Both were closed end funds with a limited life (24 years in the case of FCGT), and mainly invested in foreign (government) bonds offering a yield premium. The main difference was that the Dutch fund included a complex augmented income component and the great difficulty of valuing this feature (and unprecedented political upheaval and conflicts towards the end of the century) led to the demise of such funds in The Netherlands. In contrast, FCGT had a simple early-redemption annual draw (the ‘lottery’) combined with a straightforward sinking fund and only one class of debenture, or certificate, holders.

FCGT raised £500,085, net of expenses, through its first debenture issue. This equates to about £40 million adjusting for inflation. According to The Standard newspaper, the majority of investors purchased between £15,000 and £30,000 of debentures, equivalent to between £1.35 million and £2.7 million in today’s money. This implies that there were only about 25 founding investors. Hence the very first investors in 1868 were a small group of rich individuals and not ‘the investor of moderate means’ envisaged in the initial prospectus. However, following the sale of four further tranches of debentures to new investors, the investor base became much broader. By the late 1870s, the average investment in FCGT had fallen substantially to only £570.

In 1879, FCGT underwent a radical change. Following the ruling in Sykes v Beadon against the legality of its common law structure, the Trust along with the rest of the industry converted into a joint stock company and adopted a capital structure more familiar to investors today. The debentures were swapped for preferred and deferred shares which were thereafter traded on the London Stock Exchange. The lottery component was also removed from FCGT at this juncture and the 24-year fixed term funding was replaced by permanent capital. Within a few years, FCIT had a shareholder register which included such tradesmen as ‘leather cutter’, ‘slater’, ‘warehouseman’, ‘flax spinner’ and, ‘farmer’, although the majority of its shareholders were drawn from the well-to-do business community and professional middle class.

The investment strategy of FCGT was deliberately designed to invest in higher yielding foreign government bonds. At the same time, the aim was to diversify away any extra default risk arising from exposure to a single individual developing country by investing in a wide range of issuers. To modern day investors, its portfolio would be considered one of emerging market sovereign bonds. For example, in 1868 FCGT had a large allocation to Turkish Government Bonds yielding in excess of 10% but nothing invested in the lower yielding government bond markets of France and Germany. 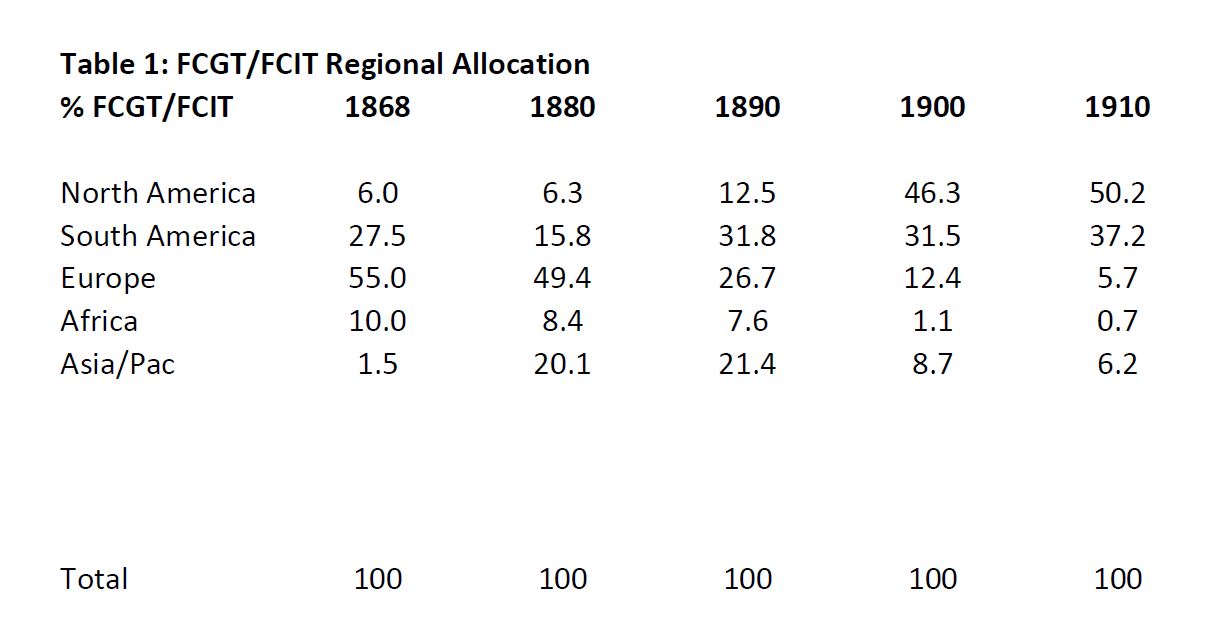 Regarding sector allocation, investment strategy moved away from government bonds as shown in Table 2. FCIT became an emerging market corporate bond portfolio for the most part.

FCIT’s investment strategy produced attractive returns for its investors over the first 45 years of its existence against a non-inflationary backdrop together with the continued decline in British government bond yields, down below 2% by 1899. From 1868 to 1879, the first issue of FCGT certificates produced returns in the region of 6.5% per annum. After the change of legal status in 1879, deferred shareholders earned a return of 6.9% per annum and preference shareholders 4.5% per annum up to 1912. Furthermore, management costs were low. A patient, long-term, buy-and-hold investment philosophy kept transaction costs to a minimum and management costs were charged as a fixed administration cost rather than as a percentage of the underlying asset value as today.

Hence the total expense ratio was remarkably low at between 0.2% and 0.25%. Investment trusts therefore offered very good value for money then, just as they do today. Overall therefore, investors should have been very satisfied with the low fees, the returns in excess of British government bonds and the low volatility, under 5%, during the formative period from 1868 to the end of 1912.

Looking back over the last 150 years FCIT exemplifies one of the highly successful innovations in modern finance, namely, a collective investment vehicle. It provided the ‘investor of moderate means’ with the opportunity to access foreign securities, that would otherwise have been difficult for the individual investor to buy and sell, at an extremely low cost. Moreover, the fund provided a level of diversification that all but the wealthiest individuals could have achieved. Above all, FCIT succeeded in delivering to its investors a substantial return premium over British government bonds without taking undue risk.

It is important to emphasise that the British not only copied but they also improved upon the initial idea formulated by the Dutch a century earlier. Hence, for example, whilst the Dutch mutual fund Eendragt Maakt Magt, established in 1774, had held its stock certificates for safety and security in an iron chest requiring three separate key holders to unlock it. Almost a century later, FCGT appointed lawyers, bankers, and accountants together with an independent actuary to verify its procedures, assets and annual valuations. Such improvements reflected the broader development of financial and professional services in the intervening years in a country with relatively strong legal protection. In this sense, FCGT/FCIT was a better product than its Dutch predecessor.

An analysis of FCGT/FCIT in its formative period answers important questions about the origin, diffusion and benefits of this important innovation of a collective investment vehicle. Subsequently, the first unit trusts, or mutual funds, launched in Britain in the 1930s by M&G and others drew heavily on the structural features of this first investment fund from 1868. Similarly, the pattern of returns achieved over almost 50 years by FCGT/FCIT provided an early indication of the benefits of globally diversified investment into a high risk asset class, in this instance emerging markets bonds. The investment foresight shown by FCGT in 1868 is well illustrated by the fact that it took more than 100 years until the next generation of emerging market bond funds appeared on the investment scene. As Mark Twain was alleged to have said, “history doesn’t repeat itself but it often rhymes”.

Nigel Morecroft is a former asset management professional and a fellow of the Royal Historical Society. His book The origins of asset management from 1700 to 1960 was published in April 2017.

2021 saw plenty of political, social, and economic upheaval globally, and ended with the rising spectre of the Omicron variant. But what will 2022 bring? Leading industry
professionals talk to Professional Investor about the key themes and challenges that will dominate the coming year.

Man+Machine – The evolution of fundamental scoring models and ML implications