London, 21 March 2018: CFA Institute, the global association of investment professionals, today released the findings of its 2018 Brexit member survey, revealing the latest sentiment among investment professionals about the impact of Brexit on the asset management industry. The CFA Institute Brexit Survey reveals some signs of optimism about a post-Brexit world, but challenges for UK investment management are anticipated.

On UK market competitiveness, the survey highlights a modestly improved outlook on the part of UK investment professionals, with slightly fewer in this year’s survey believing that Brexit has caused a deterioration in the competitiveness of their home market (68%, down from 70% in 2017 and 74% in July 2016). Still, 64% of UK respondents expect Brexit to negatively impact their firm’s ability to attract the best talent, and 67% expect their firms to reduce their UK presence—this number rises to 76% of those polled in the EU (ex UK).  The survey also reveals that 80% of respondents worldwide expect Brexit to negatively impact UK returns. This rises to 90% of EU (ex UK) respondents.

Most in the UK (51%) felt optimistic that the UK would maintain its regulatory alignment with the EU from a financial markets perspective. However, on the question of delegation restrictions (such as outsourcing of portfolio management), few either in the UK or globally considered the prospect as positive for investors: notably, respondents in China (52%) and the UK (49%) felt delegation restrictions would be negative for investor outcomes.

The survey results place Frankfurt as the most likely perceived winner from Brexit, followed by Paris, Dublin, Luxembourg and Amsterdam. Paris is the biggest mover, moving up from fourth place to joint-second, and Amsterdam’s ascent into the top five edges New York into sixth place.

“What is powerful about this research is the body of opinion it provides from a large number of investment management professionals around the world, many of whom have no emotional investment in Brexit. While we see some signs of optimism, views of CFA Institute members vary between the markets, and much uncertainty remains over the likely outcome of the Brexit negotiations.”

“The emotional temperature as revealed in the latest CFA Institute Brexit survey is falling, but the most recent findings show considerable concern for the UK’s competitiveness as a financial centre. In light of the uncertainty over how the Brexit trade deal negotiations will play out, an increasing number of survey respondents in firms with a strong UK presence expect to see that presence reduce. Respondents, whether from the UK, EU or rest of the world, are also pretty clear that restricting delegation arrangements would have a negative effect on investor outcomes.” 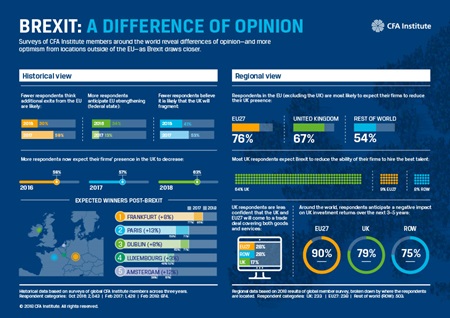 CFA Institute is the global association of investment professionals that sets the standard for professional excellence and credentials. The organization is a champion for ethical behaviour in investment markets and a respected source of knowledge in the global financial community. Our aim is to create an environment where investors’ interests come first, markets function at their best, and economies grow. There are more than 150,000 CFA® charterholders worldwide in 165+ countries and regions. CFA Institute has eight offices worldwide and there are 151 local member societies. For more information, visit