The regions that least contributed to the climate crisis are likely to suffer the largest consequences, but their voices are not being heard in the ESG debate, argues Ahmed Olayinka Sule, CFA, London-based financial analyst and writer.

As the world grapples with changes in the atmosphere's composition, pressures on natural resources, pollution, inequality, digital disruption, urbanisation and misgovernance, environmental, social and governance (ESG) investing has grown exponentially. According to Bloomberg, global ESG assets will exceed $53 trillion by 2025. As ESG moves from the fringes to the mainstream, ESG factors become an integral part of business decision-making. Among the three ESG factors, the environmental element related to climate change, biodiversity loss, and natural resource inefficiencies is considered the principal factor by many investors.
Suppose one looks at global C02 emissions per capita and overlays it with climate vulnerability. In that case, one will notice a paradox whereby the regions that least contributed to the current climate crisis are the most likely to suffer the consequences. Yet, despite this asymmetric distribution of pain and gain, the west has the loudest say in ESG conversations and decisions.
There needs to be decolonisation of the prevalence of western voices in sustainable finance. In its present form, the conversations around sustainability can be likened to a neo-colonial talking shop dominated by western economists, politicians, media, philanthropists, billionaires, investors, royalty, think tanks, academics, activists, celebrities and standard setters making the critical decisions that affect the rest of the world. Because of the disparity of black and brown voices in the ESG conversation, it should be no surprise that there has been a one-size fit western-centric ESG analysis. If we are to create a more sustainable world, the Global South should lead the move.
Due to the overrepresentation of western voices in sustainability discussions, policies and decisions are made with little consideration of its impact on low-income countries predominately located in the Global South. A typical example is a call by predominately western governments to end the financing of fossil fuels. If this policy is implemented, countries like Nigeria, which generates 40% of its GDP, and 95% of its foreign exchange earnings from the oil and gas sector, will be economically castrated.

We also need to decolonise the distribution of gains and losses resulting from the transition towards a global green economy. According to Mark Carney, the UN Special Envoy for Climate Action and Finance, the shift toward net-zero emissions will be the "Greatest commercial opportunity of our time." However, if the current trajectory continues, these gains could be tilted to western investors in western companies registered in western countries. In contrast, developing countries which are already heavily indebted are receiving additional climate-financed loans from western countries to tackle the ever-increasing cost of climate change. According to Oxfam, around $24 billion of the climate finance loans granted to developing countries were offered on strict terms requiring higher repayments from low-income countries.

The underrepresentation of non-western players in setting up ESG taxonomies and other forms of standard-setting has led to situations whereby policies are made and changed to suit western interests. For example, there was zero tolerance for financing fossil fuel investments before Russia's invasion. However, after the attack, Europe's energy security was threatened as Russia indicated that it could cut supply to the region. As a result, the European Commission recently stated that the EU bloc could increase its coal usage by 5% over the next 5 to 10 years to replace Russian imports. Another instance of the west's shifting goalposts is the case of nuclear energy. Nuclear energy has generally been considered not sustainable due to its toxic waste. However, under pressure from France, which has 58 nuclear power plants, the European Union plans to update the EU taxonomy to accommodate nuclear energy as a green investment to meet its 2050 net-zero target.

Under ESG investing principles, financing organisations that produce military weapons and ammunition is discouraged. However, with the ongoing war in Russia, there are calls for military stocks to be included as socially responsible investments. According to two Citi Bank analysts, because the war has contributed to increased NATO spending, which will be positive for military stocks, the EU taxonomy should be tweaked to label investments in military contractors as ESG compliant. Furthermore, SEB Bank reversed its policy of investing in the defence sector to capture the investment gains arising from the outperformance of military stocks due to the war. We can't continue a situation whereby global ESG rules are anchored to western interests. ESG standard setting should be reconstituted so that the Global South has a more significant say in standard-setting to avoid the development of taxonomies that favour the west to the detriment of others.

Focusing on the Social Factors

Western organisations tend to emphasise the environmental component of ESG investing while downplaying the social factor component, which is just as important for the Global South. When addressing the social element of ESG investing, western organisations often focus on the easy wins and address the symptoms of inequality instead of the causes. While the emphasis is placed on impact investing, diversity and inclusion, little attention is paid to an economic model that has long created winners in the Global North and losers in the Global South. In decolonising ESG, there should be a move to close the loopholes that lead to the illicit transfer of funds. Investors focusing on the social component of ESG should address how western financial institutions have enabled illicit financial flow from the Global South. The offshore centres, many of which are non-self-governing territories of Western countries, need to be restructured so they don't serve as a haven for illicit funds from the Global South. An economic system that creates a concentration of wealth whereby the 22 wealthiest men in the world earn more than all the women in Africa combined needs to be addressed with the same passion as ending the financing of fossil fuels. Furthermore, an uneven global trade arrangement favouring the west to the detriment of the rest of the world in terms of intellectual property protection, weaker workers' rights and subsidies for the western agricultural sector needs to be reconstructed.

The governance component of ESG investing is often analysed from a western perspective, which could have the unintended consequences of penalising emerging markets. For instance, under the ESG framework, corruption is often viewed as the exclusive preserve of emerging economies. When corruption is discussed under ESG themes, it is usually about payments made to government officials for activities that influence decisions in emerging markets. Moreover, metrics for governance do little to track practices prevalent in the west, such as lobbying and revolving doors. Therefore, when one looks at governance indicators such as the  Worldwide Governance Indicators and Global Governance Index, it is not surprising that western countries have a higher rating than their global south counterparts.

I propose a climate reparation scheme that accounts for the head start western countries enjoyed while exploiting the environment. Here is how it will work: If the Global South is expected to decarbonise in 30 years by forgoing fossil fuels, in that case, it will be at a competitive disadvantage relative to western countries, which have enjoyed a 250-year head start since the commencement of the industrial revolution. Therefore, an option to consider would be implementing a scheme that will compensate the Global South for pursuing a net-zero policy by a climate wealth transfer from the Global North to the Global South. The wealth transfer could be calculated by subtracting the per capita of each developing country from the average per GDP capita for the west (currently $44,107 per capita) and multiplying the differential by the total population.

In this way, Nigeria, a country reliant on fossil fuel with an average per capita of $1,969 relative to the west's average per capita of $44,107, would receive $8 trillion from the Global North as compensation for decarbonising. On a regional basis, the west would transfer $15.8 trillion and $57.8 trillion to South America and the African continent, respectively. This should not be a small ask, considering the gains the west made during the post-industrial revolution at the expense of the environment and the profits it stands to make from the move to a green economy.

The transition toward a net-zero world will require access to certain raw materials such as cobalt, neodymium and copper. Many of these raw materials are in the Global South and Africa in particular. Furthermore, in the quest to offset carbon emissions, some western companies have engaged in massive reforestation programmes has the potential to lead to land grabs. For example, Action Aid revealed in 2021 that Shell's reforestation plan to offset its carbon emission would amount to the acquisition of 12 million hectares of land by 2030, leading to aggressive land grabs in the Global South. Therefore, the west should avoid another scramble for African resources in the name of decarbonisation to the detriment of Africa.

If ESG investing continues its trajectory, the Global South could realise that it has become a tool for Western hegemony rather than being a force for good. 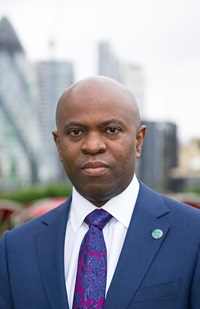 "The views stated in this article are personal to the writer and does not represent the views or opinions of any company or organisation with which the author is or was associated.”