Growing up in Ireland in the early nineties, Deirdre Cooper could never have imagined that she would go on to become an important voice in the sustainable investing industry. In fact, Cooper had initially decided to pursue a career as an actuary. “I really liked maths and numbers, and actually, unemployment in Ireland was very high. There were never any unemployed actuaries though,” she points out, smiling.

Cooper studied Actuarial and Financial Studies at University College Dublin, and joined Morgan Stanley as an investment banker in 1997. “It was a real baptism of fire. You work long hours but you get really great exposure.”

She loved finance, but realised that she wanted to work in the sector in a more meaningful way. In 2003, she went to Lahore, Pakistan to work with Kashf Foundation, a non-profit microfinance organisation. “It was a great experience, and from then on I knew I wanted to continue to have a role in sustainable finance,” she says.

Cooper decided to attend Harvard Business School to complete an MBA in 2003. While there, she worked with three business school colleagues, who together with the United Nations launched The Global Microentrepreneurship Awards, designed to identify successful small businesses in a group of developing countries (in 2005 the awards were taken up by Citigroup).

After her MBA, Morgan Stanley lured her back with the offer of working with the late Jeremy Heywood, a former civil servant who had served as principal private secretary to Tony Blair, and who was building a sustainable finance business within the firm. “Jeremy was a really incredible person. He was committed to using finance to make the world a better place. The bank said ‘why don’t you work with Jeremy, but also work for The Young Foundation one day a week’. Michael Young founded Open University. He was the father of social entrepreneurship,” she says.

She remained with the Morgan Stanley for a decade, launching its cleantech group, before joining Ecofin, the sustainable investment firm, and was subsequently promoted to partner.   She remained with the company for a decade, serving as head of research and co-portfolio manager of the Ecofin Vista and Global Renewable Infrastructure fund, and also as co-portfolio manager of several institutional mandates.

When Ecofin was sold to an energy investor in 2018, Cooper left and joined Ninety One (then called Investec Asset Management). She co-manages the Global Environment Fund alongside Graeme Baker. The fund returned 47.8% in 2020, considerably outperforming its benchmark. It is a high conviction, concentrated portfolio with a high active share. Of its universe of approximately 1200 companies, only 12% overlap with the MSCI All Country World Index.

“We have a really detailed fund management process. We spend months researching companies and understanding their strategies. Do they have strong competitive advantage? Are they thinking about all sustainability issues, including doing a good job in terms of human capital? We then build our portfolio which is highly concentrated. We typically hold about twenty-five names and we really go into detail reporting on impact,” she says.

Thematically, the fund is focused on renewable energy, resource efficiency, and electrification. Cooper points out that measurement is always a key concern. “It’s quite possible to achieve it at a company level. I get a good idea of whether a company is decarbonising its own business, I can look at the carbon avoidance of its own products and form a view. It gets more complicated when you are looking at a large universal owner. It’s difficult to compare across industries, because some industries have completely outsourced manufacturing. Some industries have decarbonisation pathways, and others, like airlines, won’t have them for quite some time. So it’s also about developing net zero metrics that look at sector and regional allocations, and take regional justice into account,” she says.

Last year, Ninety One launched its Net Zero Sovereign Index, to try and address some of the challenges around measurement by providing sovereign debt investors with a robust, independently verified assessment of how successfully companies were aligned with the Paris Agreement, according to the firm. The index identifies that emerging markets are disproportionately exposed to climate change, and that while a successful net zero transition will require change in regulation, consumer habits, technology and capital allocation, the risk in capital allocation models is that emerging markets will not get the capital they need to meet their transition targets. As a result, the index, which covers 115 countries, is the first to incorporate the full range of emerging markets, according to the firm, and also why Cooper emphasises that the concept of regional justice is so important.

“The climate battle will be won or lost in countries like Pakistan or Indonesia. We need to mobilise capital for emerging markets,” she says.

The Role of Corporates

When Cooper began her career in the sustainable world, progress was slow. So what does she think of the journey to net zero today? “Anyone who would look at this would say it is incredibly challenging,” she replies. “Cop26 wasn’t a disaster, but it wasn’t really the world coming together either. In the corporate world, we are starting to see a great deal of change. Increasingly, any CEO who doesn’t consider climate risk is a CEO who isn’t doing his job. It isn’t just good corporate citizenship. Climate risk is a business risk,” she says.

She believes that the companies which will thrive in the future will be those which do not only think of their shareholders, but of all stakeholders. “I believe that the corporate world is increasingly getting there. They know they have to get there,” she says. 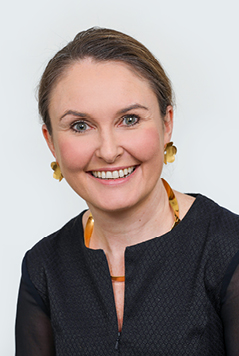