Emerging markets ESG mandates performed well during last year’s period of high volatility. But active managers did not perform as well as passive managers during the recovery, say Jens Nystedt and Oliver Faltin-Trager.

In recent years, Environment, Social, and Governance (ESG) considerations have commanded significant interest from investors across all asset classes, including emerging markets (EM) fixed income. As EM ESG fixed income mandates and benchmarks are still relatively young, the March 2020 market shock served as the first major stress test for such strategies. Overall, when compared to their non-ESG counterparts, we feel that the performance of these ESG mandates during the sell-off and the subsequent recovery will likely be an important driver for the pace of ESG asset growth and investor interest going forward.

Financial markets came under intense pressures in March last year as the world-wide lockdowns to combat the Covid-19 outbreak essentially shut down the global economy. EM fixed income assets were no exception to the pressures of Covid-19, and, as a result, they suffered significant losses as the overall shock was magnified by a poorly-timed oil price war between Russia and Saudi Arabia that weighed heavily on oil-exporting countries and their corporates. Market liquidity conditions were also quite challenging as market participants were forced to relocate to work from home setups or disaster recovery locations. This made it particularly challenging for EM to deal with large outflows, as many investors, particularly those that are retail based, headed towards the exit.

In the months following, there was an unprecedented recovery across markets that was driven by the incredible fiscal and monetary stimulus actions from governments and major central banks. Looking back, the period from March to June gives a unique timeframe to analyze how ESG indices and mandates performed during a crisis and resulting market rebound. These mandates have grown exponentially in a very short time, and J.P. Morgan reported that overall assets that track against their ESG benchmarks grew to over $20 billion at the end of 2020 in a mix of new mandates as well as conversions of non-ESG funds to ESG-aligned mandates (as of 15 January 2021). 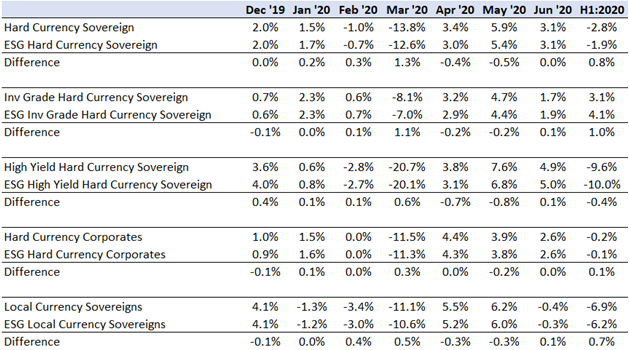 
When analyzing the source of the outperformance, it is not surprising that EM investment grade issuers, whether sovereign or corporate, outperformed high yield issuers during the March sell-off. We believe that this is a result of that both the ESG benchmarks and ESG mandates held greater exposure to higher quality issuers over the stress test period. There appears to be a correlation between the ESG score and credit rating, as illustrated in Figure 1 below, which supports the view that incorporating ESG scores could limit downside performance during periods of market stress. A focus on environmental factors typically also means that an ESG mandate or benchmark would have a lower allocation to commodity producers and oil exporters that screen poorly against ESG metrics. For example, the exclusion of Mexico’s state-owned petroleum company, Petróleos Mexicanos (Pemex), helps explain nearly 20% of the outperformance of the ESG hard currency benchmark. Moreover, the exclusion of some oil exporters from the ESG sovereign high yield benchmark, including Nigeria and Angola, helped it to outperform the non-ESG version. 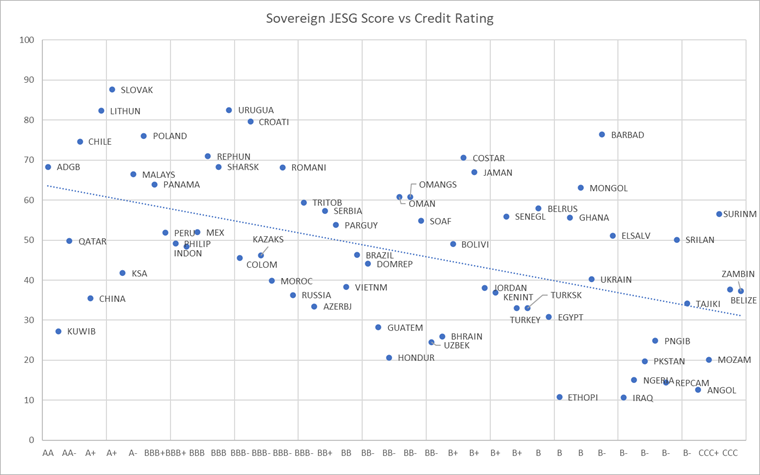 
EM ESG benchmarks gave back some of their outperformance as the market recovered in April. This reflected the flipside of these benchmarks higher weighting to lower-beta investment grade credits. Additionally, oil exporting credits that drove the underperformance in non-ESG benchmarks in March were important drivers of the subsequent recovery. Nevertheless, combining the period of sell-off and recovery ESG benchmarks outperformed for the first six months of 2020, with the exception of the sovereign high yield component, which was dragged down by more concentrated exposure to debt restructuring stories such as Ecuador, Lebanon, and Argentina.

In our opinion, you cannot focus on ESG factors alone. Traditional bottom-up analysis, which is required to assess the ability and willingness of an issuer to pay, needs to be applied first. Next, active managers could also balance the use of static ESG scores as a portfolio screening tool against an issuer’s likely outlook.  For example, while some EM issuers may have high static ESG scores, they can also be making decisions that will negatively impact future scores. And vice versa, low scoring EM issuers can also make critical decisions that will drive improvement to their ESG scores in the future. These decisions typically take time to be reflected in a country’s ESG score. Active managers, who employ a fundamental analysis approach can look to capitalize on this temporary score dislocation, helping to drive performance.

We believe that the outperformance of EM ESG benchmarks during its first real stress test will continue to drive interest in ESG-based investment strategies in EM fixed income going forward. Investors can now have greater confidence that EM ESG mandates can perform well during a volatile period, but they are right to be concerned whether active management can outperform its passive counterparts. To benefit from growing investor inflows into these mandates, we believe that active managers will need to apply fundamental investing principles alongside ESG factors to drive performance and differentiate themselves. 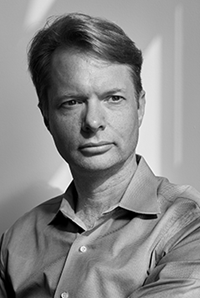 Jens began his career in 1998 as an Economist at the International Monetary Fund, where he worked for the Research, Policy Development, Special Operations, and International Capital Markets Departments. He then joined Deutsche Bank in 2004, initially as Chief Economist for EMEA and Head of the Local Markets Strategy, and subsequently held senior research positions in both the Emerging Market and Global FX Research groups. Jens then joined GLG where he was part of the Global Macro Investment team. Following GLG, Jens joined Moore Capital in 2008 where he held roles in portfolio management and global macro analysis. In 2014, Jens joined Morgan Stanley as a Senior Portfolio Manager and Head of Sovereign Research. He joined Emso in 2017 as a Long Only Portfolio Manager. Jens holds a PhD in International Economics and Finance and a MSc in International Finance from the Stockholm School of Economics. 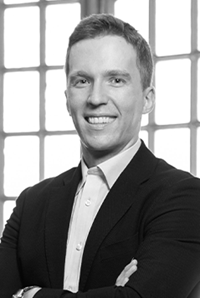 Oliver began his career at BlackRock in 2010 as a PhD Associate in the Financial Modeling Group. He joined HBK Capital Management in 2012 as an Investment Analyst focused on quantitative modeling and trading, working across a broad range of asset classes. Oliver joined Emso in 2016. Oliver earned a BS in Electrical Engineering and Computer Science from the Massachusetts Institute of Technology, an MPP from the Harvard Kennedy School, and a PhD in Finance & Economics from Columbia Business School.