Justin Onuekwusi, CFA, has a senior role in the investment industry. He also gives back to the profession in a variety of different ways, from developing mentorship schemes, leading on DEI, supporting the black career pipeline, and a host of other initiatives.

Justin Onuekwusi, CFA, is busy. As Head of Retail Multi-Asset Funds at Legal and General Investment Management (LGIM), Onuekwusi is responsible for leading, developing and driving LGIM’s retail investment business, and is part of a team managing over £65 billion in assets. He is also an advisory board member for the City of London Social Mobility Taskforce, the co-founder of #TalkAboutBlack - which targets the black career pipeline - founder of EnCircle mentoring circles, a non-executive director, an advisor to the board of City Hive, a member of LGIM’s Global Diversity Leadership Council, and the creator of the Rolling Start podcast, which showcases role models, particularly those who have shown resilience in the face of life’s challenges.

So when I ask, only half-jokingly, when he finds the time to sleep, Onuekwusi laughs. “I try and squeeze it all in. It’s really important to me that as well as being fund managers and investors, we give back, and we help others who are probably less fortunate, to fulfil their potential.”

He is aware that his own career could have taken a different shape. Onuekwusi almost became an actuary. Growing up in inner city Manchester, he says he was surrounded by a strong community, but people didn’t necessarily value the power of education for social mobility. It was a maths teacher who encouraged him to join the actuarial profession. “He said it was a secret profession, the highest paid in the entire world, which wasn’t true of course.” But Onuekwusi was very good at maths, and after that conversation he set his sights on becoming an actuary.

Onuekwusi’s career progressed rapidly. “I passed my CFA very quickly, in two and a half years, and then people started to realise that there was something there, and at a very young age they were giving me clients to consult on and pushing me out to client meetings and so on and so forth. And I thought, okay I can do this, but I actually wanted more grounding in what I was saying. I wanted to be an expert.”

In 2007, Onuekwusi moved to Merrill Lynch, after being recruited by a former Aon executive. He became an analyst working in manager research and portfolio construction.

“That’s when I really started to understand the dynamics of running a fund, because I was sitting on the opposite side of the table, speaking to fund managers on a regular basis,” he says.

In 2010, he joined Aviva Investors, working in a team managing £70 billion in multi-asset funds, once again recruited by a former colleague. Within six months, he had launched a retail multi-asset strategy.

“The stuff I had done at Merrill Lynch was around building multi-asset propositions and the head of multi-asset who brought me in clearly had a lot of confidence in me. That was when I really realised the value of sponsorship. Any time I had doubts about myself, and any time I had challenges, I would go to speak with him, and he’d say ‘why are you coming to me with this, you are really talented, you should believe in yourself’. Those types of pep talks gave me confidence.”

Three years later, he moved to LGIM, and he has been there ever since, taking on the running of retail investments in January this year. He is also Head of Retail Multi-Asset Funds, managing strategies including risk targeting funds, peer grouped benchmarked strategies and model portfolios.

“It’s a big role, and right now I’m trying to balance that leadership role with the fund management role that I have,” he says.

On top of all that, Onuekwusi is also focused on effecting change in the industry. #TalkAboutBlack came about after a conversation he had at LGIM with the CEO and CIO, who wanted to launch a diversity working group and asked him why there were so few black people on the investment floor. “I was a bit taken aback, I wasn’t really expecting that question. I said let me come back to you, and then I went to the Diversity Project.”

He became involved in an ethnicity work stream of the Diversity Project. “Effectively, that platform became #TalkAboutBlack,” he explains.

He says that whilst there is much more to do, LGIM is already doing many of the right things when it comes to encouraging better diversity across teams, from the formation of employee networks called the Legal & General Inclusion Team (LEGIT) in 2018, to insight days for students, involvement in Fast Futures Group and taking 17 interns from the 10,000 Black interns initiative. Most importantly, he says LGIM also empowers individuals to drive change across the industry and Onuekwusi believes he has benefitted from this.

Onuekwusi realised that one of the challenges facing the industry has been going beyond helping people enter the profession, to actually how they can move through the pipeline. “How do they go from an operations role to a fund management role. How can they go from a junior analyst to a senior manager? That’s where I’ve spent a lot of my focus.”

It was part of his thinking behind launching EnCircle – mentoring circles designed to connect professionals with up to 15 years of industry experience with senior mentors who can help them navigate their career progression. “I realised that as a senior black fund manager in the industry, I cannot individually go and speak to everyone who wants some of my time and who I could potentially help. I have to try and scale it, and mentoring circles are a great way of doing that. Every month we have forty or fifty people.”

He’s trying to achieve that same scale in making a difference elsewhere, for example working with organisations such as Manchester’s State Talking charity, which seeks to inspire state school children. Onuekwusi is also a judge of the Women in Investment Awards, and more recently, has become involved at tackling diversity and inclusion in football.

The podcast, Rolling Start, is about showcasing role models, but also highlighting the fact that life doesn’t always go in a straight line. “Everyone has set backs. It’s really important how you respond and react to those set-backs to fulfil your potential,” he says.

He is confident that things are changing. “The question is whether change is coming quickly enough, and the answer is probably not.” Onuekwusi is waiting to see what regulation will bring on Diversity and Inclusion, and how the government will address the ethnicity pay gap. Asset owners have their own part to play by voting with their feet and refusing to allocate to managers who aren’t diverse, he suggests.

In 2020, Onuekwusi was featured in the Empower Senior Executive Leaders List. He was also awarded the honour of the Freedom of the City of London. With what limited time he has, he says he likes to catch up on a few box sets, and spend time with his family, acting as a taxi driver for his kids, he jokes. He is also a season ticket holder for Manchester United. “It’s very unfortunate at the moment, because we’re terrible. Let’s hope for a better season next season.” 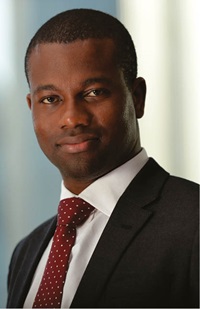