For Aneka Beneby, CFA, a career in the investment industry began purely by ‘happenstance’. Beneby, who grew up in The Bahamas, started her career as an assistant to the chief executive officer of BNP Paribas in Nassau in 2007, after completing a bachelor of commerce degree in economics, with a minor in French, from McGill University in Montreal.

“I started as an assistant. At BNP Paribas, I was introduced to capital markets, stocks, bonds, and private clients. It was fascinating to me because it wasn’t something I had comes across before. I got into this industry by happenstance and I didn’t want to leave,” she says.

She had planned to augment her existing education by completing a masters’ degree in trade and finance – having already received scholarships from institutions in China and the US. Then, she heard about the CFA Program. “People warned me that it would be challenging, but that motivated me to pursue the qualification as I was never one to back down from a challenge. In 2013, I passed all levels and became a Chartered Financial Analyst, but it’s important to note that I didn’t pass level three on my first attempt. This was an important lesson in humility. I also realised that it was okay to fail at something that was difficult, because that’s how you build resilience,” she says.

Her career progression saw her move to Pictet Bank & Cie, initially working as an assistant to the investment strategy team. “Pictet was where I began my training as a portfolio manager. I had a hands-on boss who was patient and eager to explain how the business worked in detail. This was also where I learnt about client service excellence and ensuring the client’s needs always came first,” she explains.

She went on to become a junior portfolio manager, spending part of her tenure at the firm in Geneva. She then moved to Julius Baer as a portfolio manager in 2013, responsible for managing all the firm’s discretionary business in The Bahamas.

She was pregnant with her first child when Julius Baer offered her a new role in London. Despite her misgivings about taking on this challenge, she relocated in 2019. “I had my son in The Bahamas, and then came to London when he was six months old.  I was managing a new country, a new job and being a new mom. This was probably the most challenging career and personal decision I’ve made, but I persevered and made it through,” she says.

In her current role, Beneby is responsible for managing high net worth client portfolios in globally diversified multi-asset class strategies. She is also part of the Global Equity Income team, where she does fundamental research analysis on companies with attractive dividends and high sustainable dividend growth. “I love that I have a communicative role with our clients, which includes discussing market activity and performance, pitching for new assets, and ensuring clients understand the strategies we are employing to achieve their investment goals.”

Beneby is also heavily involved in mentorship and Diversity, Equity, & Inclusion (DE&I) initiatives, both at Julius Baer, and further afield. She is a founding member of CFA UK’s Black Professionals working group, within the Inclusion and Diversity committee. The working group aims to increase the number of black professionals in the investment industry, create a safe space to share experiences and encourage mentorship.  She says that her own experiences of growing up in a country where she was not a minority, shaped her views and propelled her to be part of the change she wants to see.

“Growing up in The Bahamas, I was surrounded by black people who were thriving in various sectors of society, from law to politics to medicine. I was particularly inspired by women who were succeeding – these women were strong, authoritative and had iron clad integrity. In The Bahamas, due to its small population, you could meet and interact with working professionals as they went about their day to day activities. Having that proximity to them made me believe that if I put in the work, anything was possible. I could be who I wanted to be. On reflection, it became apparent that a lot of people simply didn’t have role models in close proximity who they could draw inspiration or emulate, particularly when it came to women in positions of influence. This was a privilege I had, and with privilege comes the responsibility to give back.”

Inspiration also came closer to home. Beneby’s mother was a teacher and role model who encouraged excellence. “She believed in me, she was my biggest cheerleader.”

Beneby says she is surprised with the lack of black representation in the City of London. “On the outside looking in, you hear of London being hugely diverse, but there is still work to be done. On the positive side, I’ve noticed that we are now having conversations about diversity regularly and there are forums where we have been able to discuss some of the key issues for black investment professionals. These forums and conversations, though difficult, need to keep happening, at home, in the industry and at a national level.”

She is optimistic that the ‘S’ of ESG will catch up to the ‘E’ and ‘G’ in time. “I think companies who are ignorant of the structural changes taking place in the industry are going to be negatively impacted in the long term. It’s not only about attracting diverse talent, but about retaining talent. People will want to go where there is progressive thinking on attracting and retaining diverse talent, so there will be a self-correcting mechanism where companies will need to make changes rather than get left behind.”

It is part of the reason why Beneby is so passionate about mentorship. “I had a great mentor who helped me to become President of CFA Society The Bahamas and continued to support me when I took over the leadership of the organisation. Therefore, I am keen to share my experiences with other people, especially young people, to pay it forward. I also like to encourage young people to engage in mentorship of others, as they become more comfortable in their careers. Being in a top position or having an important title isn’t necessary to be a mentor. As you long as you can impart knowledge and share your experience to someone else, you can play a vital part,” she says.

She’s learnt the importance of being fearless, she says. “We can’t allow failure to stop us from pursing our goals. There’s no shame in failing. Instead of being ashamed, I’ve learnt to look for the lesson in failure, to learn from it and try again using failure as my motivator. Another key lesson I have learnt over the years is to build trust. Often we think the investment industry is about technical skills, and that’s not to say that isn’t an important skill, but equally, it is about having soft skills such as empathy and being able to engender trust. We are stewards of our client’s wealth, therefore, it is critically important to build trust with them and act with integrity.”

When she’s not busy at work or advocating for change in the industry, Beneby is focused on spending time with her family, and experiencing what London has to offer. “I’m finally getting a chance to explore London after such a long time,” she says, smiling. 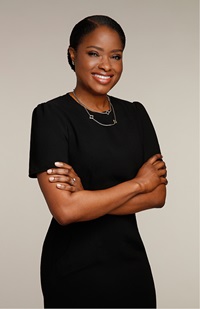