Anne Richards, CEO of Fidelity talks about inclusion and diversity

Anne Richards, CEO of Fidelity talks to Ben Elvidge, Lead of the CFA UK’s Socio-economic Inclusion Working Group about her journey to the top, the challenges of building an inclusive culture and gives her advice to future generations wanting a career in finance

When Anne Richards was growing up finance was a career path that was considered by her family as alien. It was only after she discovered the industry in an MBA she made her move into investment management, where she quickly rose to the top.

Now as CEO of Fidelity, she is focused on building an inclusive and diverse company. Having been an outsider once herself, she is passionate about creating an environment where people feel like they belong and have the right to be there without apology.


What having a diverse and inclusive culture means

Richards says: “If we really crack this, if we get this right, if we truly have a diverse culture and inclusive culture, that eventually will lead you to a sense of belonging and belonging is about not feeling like you're in an alien environment.

“Certainly when I look back on my own journey, that feeling of being an outsider was definitely there for a big part of the beginning part of that journey, because I didn't have a family background in financial services or indeed in business. It was just totally alien to the environment I grew up in.”

Initially Richards was inspired to be an engineer after a physics teacher from her local comprehensive school suggested it to her. But after a job in research at CERN, she decided it was not for her and moved into financial markets.

Getting the Chief Executive role at Fidelity International, she explains was a homecoming to her as one of the very first analyst positions she applied for back in her MBA days was at Fidelity and they turned her down.

Female representation at the top

“When I look now at my peers and my cohort, I could reel off in financial services, half a dozen female CEOs right now today, without thinking too hard about it, 20 years ago, that was not the case,” she says.

“So with a long way to go, we have made a lot of progress, there are all sorts of reasons for that, but a very concerted push on gender has unquestionably helped that.”

What is the best way to build an inclusive and diverse culture?

To continue to make the industry more inclusive, Richards believes it is important to think about your stakeholders and have a plan, which breaks down every step from recruitment to processes around promotion and performance evaluation.

“Analyse each step and then try and take a really lateral view,” she says. “What is it that you are missing? Start with the premise that it's not working. And if it’s not working, what would that look like? Does that then look like what you already have?”

On top of this she explains you must also listen to your employees thoughts about what inclusion and diversity means to them and translate that into an action plan.

What are the challenges?

Fidelity has offices in more than 25 different countries and in every single one of those countries the profile of the way the local community works is very different.  What success looks like in India might be different to Tokyo, Dublin or Germany.

Richards says: “One of the challenges is how you can get something that is meaningful and relevant to every single piece of that quite complex puzzle, which is why things like targets are quite difficult to set in isolation, because they will look very different for a different company that has a different geographic footprint. Even within the UK, that's true.”

The importance of role models and peer networks on your career

While Richards had role models that inspired her, she thinks today having a good peer network is also very important. She says: “Steve Goldman and Jeff Lindy at JP Morgan, for example, unquestionably gave me chances that I'm deeply grateful for and showed me what a good manager, what a good leader looked like and that's really important.

“The other person who was a role model, although I wouldn't necessarily have said that at the time was Carol Galley, who was the Chief Executive of Mercury Asset Management, and very unusual for a woman at that time.

“The fact that a woman was running such a large and important business, subliminally, subconsciously showed me that it was possible. She was a real role model for the industry as a whole. I probably owe her a huge debt of gratitude just for the fact that she toughed it out.

“But I think the thing is about role models, is they don't all necessarily have to look like you. It is just people who you want to emulate because you admire them, and you respect them.”

She does not necessarily think mentors work for everyone and encourages people to create a good peer network. She says: “The power of peer networking is really important. I would recommend creating a peer group of people who you trust, whose judgment you value. You can have a bit of fun with along the way it can be a bit of a pressure valve for you when it all gets too much. That's as important as role models.”

Advice for future generations wanting to get ahead

For those waiting to get ahead in their career, her advice is to work really hard on everything that you can control, to be your best possible self and do the best job that you can.

She also recommends that it is useful to be a problem solver and take opportunities that take you out of your comfort zone. “If people know that there's a tricky thing that they can't get to the bottom of and you're somebody that actually will help them do that,” Richards says. “That's quite powerful.”

Richards own driver to the top is she liked the feeling of having her arms around the whole group, although this is bit more difficult in a large company and wanted a role with autonomy where she was responsible for the decisions.

Listen to the Podcast now: 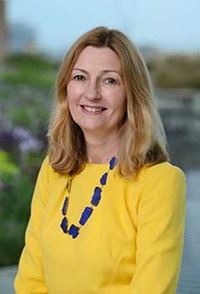